An 18-year-old man was shot to death in Uptown Monday evening, left lying among a string of over 30 shell casings that stretched for two city blocks.

Shortly after 6 p.m., a man was shot in the chest in the 1200 block of West Leland, police said. He was transported to Illinois Masonic Medical Center where he was pronounced dead at 6:45 p.m.

The victim has not been officially identified, but a city government source and social media traffic identified him as Deshawn Johnson, also known as Deshawn Markiese Jones. He turned 18 on September 1.

Uptown Alderman James Cappleman tweeted, “I spoke with the 18-year-old man who was killed tonight many many times in the past. He was counted among the youth at high risk for getting killed. He had a custom notification to try to turn his life around. How terribly sad.”

Johnson’s Facebook page is filled with images of him posing with large amounts of cash, weapons, and drugs. He was a member of the Hoola Gang sect of the Black P-Stones street gang.

Witnesses said an unknown male between 15- and 17-years-old who was dressed in dark clothing fired shots at Johnson and fled on foot.

Casings from two different calibers of guns were recovered on a two-block stretch of Leland Avenue, which may indicate that gunfire was exchanged between multiple parties.

Witnesses reported that a second person was shot in the incident and fled before police arrived. However, no one has shown up at local hospitals with unexplained wounds, a police source said.

In the 4700 block of North Magnolia, a woman called an officer into her home. She could be seen pointing to a bullet hole in her living room wall. The front window had been shot through.

At 3:30 yesterday afternoon, an unidentified gangbanger stood on the corner of Wilson and Magnolia, sending out the banger’s usual taunts on a Facebook Live broadcast. Police arrived too late to see the man in action and he was never identified.

Then, at 4:58 p.m.,  65 minutes before he would be shot dead a block away from the earlier broadcast site, Johnson posted his final status update on Facebook: “? g these hoes love to die with the gang…” 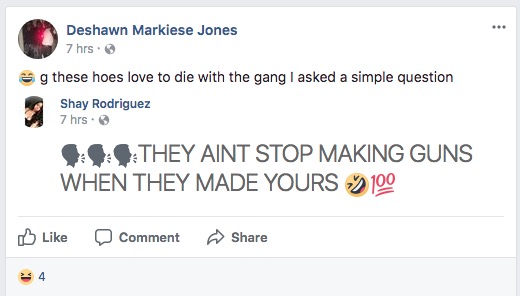