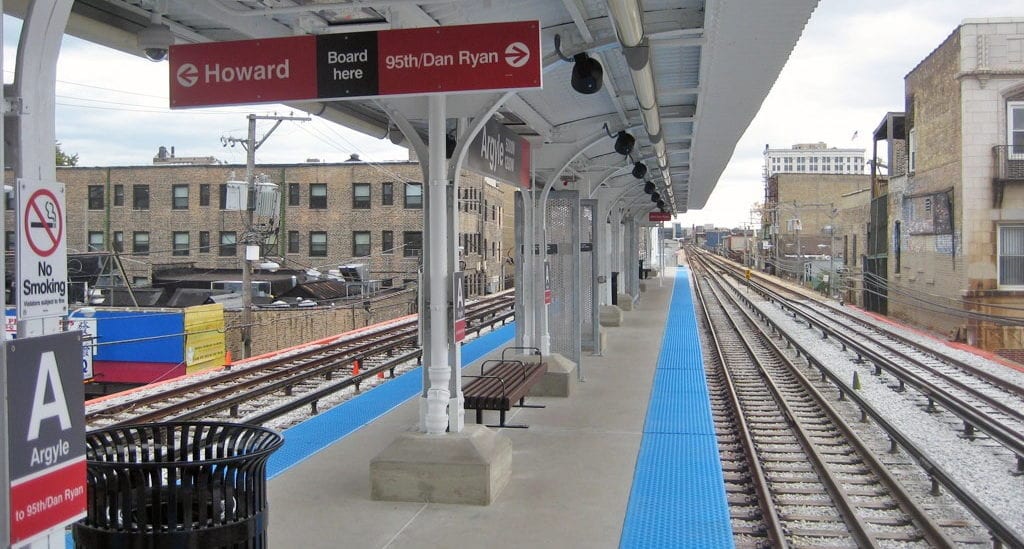 A man is in custody after he reportedly threatened fellow Red Line passengers with a flammable liquid and a lighter then set a book bag ablaze at the Argyle station during tonight’s rush hour, according to police and witnesses.

One police officer suffered minor injuries when as they tried to arrest the suspect on the Argyle platform, 1118 West Argyle, according to a source. An officer on-scene said that the cop’s pant leg had caught fire during the suspect’s apprehension. But a police spokesman said the officer’s injuries were “not related to the fire.”

A CTA employee suffered smoke-related injuries and is reported in stable condition at Weiss Hospital. No passengers were injured. Here are the early details:

Just after 5:15 p.m., police received calls from passengers who reported that a man had “gasoline and bottles” onboard their southbound train. The man had pulled out a lighter and threatened to set himself on fire, some 911 callers said according to emergency radio traffic.

An arriving officer said the platform was packed with passengers who had evacuated the train and the man was also on the platform—“holding lighter fluid with a lighter.”

The offender, believed to be in his mid-20’s was taken to Weiss Hospital with reportedly minor injuries.

Officially, police are saying that “a male offender started a fire while on a CTA train.” Fire officials said a book bag had been set ablaze.

A passenger who had been on the train told CWBChicago that the man began acting erratically as the train reached the Berwyn station. One passenger told the Chicago Tribune that the man splashed her with a chemical that he carried in a water bottle.

Shortly after 6 p.m., a conductor moved the train to the Howard trainyard where the police and fire department’s bomb and arson teams were waiting to begin their investigation.