An 81-year-old Portage Park man was mugged near the Lakeview Post Office on Thursday morning, police said. It’s the second robbery this week in an area that is experiencing its lowest wintertime robbery count in at least 16 years.

The victim and a witness told police that an unknown man approached him on foot in the 1300 block of West Irving Park Road around 11:18 a.m. on February 15. The stranger patted the victim on the back, saying that there was a spider on him, and then proceeded to take the elderly man’s wallet by force, according to cops.

Police said the suspect, a black man in his 60’s, was last seen heading westbound on Irving.

The elderly man was the second person to be robbed in Lakeview East this week.

Early Tuesday, police were flagged down in Boystown by a man who said he had just been robbed by five young men near a nightclub.

The victim reported that the five wrestled away his phone and wallet before they fled westbound in an alley from the 800 block of West Cornelia near Halsted Street.

He said the offenders were five young black men with one wearing a black hoodie and another wearing a red hoodie.

A Break In The Quiet

This week’s muggings are especially notable because the Wrigleyville and Boystown areas are enjoying their lowest number of recorded robberies in at least 16 years.

Just four years ago, CWBChicago was founded because our neighborhood had racked up three consecutive years of record-high robberies, with the area around Wrigley Field and Boystown having the worst robbery rate in the entire city of Chicago.

Local politicians and police executives excused the street crime as something we needed to get used to since we live in a popular entertainment area. We—and neighbors like you—strongly disagreed with our “public servants'” analysis. And, it turns out, record-setting mugging statistics are not something that anyone needs to “get used to.”

So, we’re particularly pleased to report this: In the three-month period beginning November 1, 2017, and ending January 31, Wrigleyville and Boystown recorded 24 robberies. That’s the lowest wintertime number since 2007 and the best performance since public records begin in the winter of 2001-2002.

The 24 robberies reported here this winter pale in comparison to the 55 cases in 2013, the worst full year for robberies in Wrigleyville and Boystown.

For statistical purposes, CWBChicago editors define Chicago police beats 1923, 1924, and 1925 as “Wrigleyville and Boystown.” The area stretches from Irving Park Road to Belmont and from Southport to the lake. 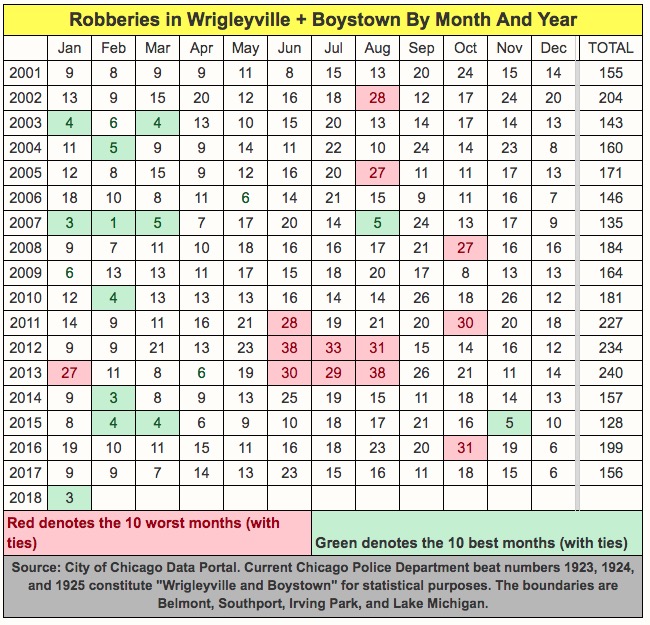 Learn more about CWBChicago’s history HERE and please consider supporting our operating fund with a contribution HERE. Contribute $49 per year or $5 month to receive exclusive members-only reports year-round.
———-
Email      Facebook       Twitter       YouTube
About CWBChicago 4363 Articles
CWBChicago was created in 2013 by five residents of Wrigleyville and Boystown who had grown disheartened with inaccurate information that was being provided at local Community Policing (CAPS) meetings. Our coverage area has expanded since then to cover Lincoln Park, River North, The Loop, Uptown, and other North Side Areas. But our mission remains unchanged: To provide original public safety reporting with better context and greater detail than mainstream media outlets.
Website Facebook Twitter YouTube