“It involves things that have been happening in the Loop that were unthinkable not that long ago — open-air drug markets, armed violence, an offender wearing body armor and carrying a gun through the Loop to engage in drug sales. This is a real problem that’s happening around us right now.”

Hopkins is right. A CWBChicago analysis of crime in the Loop found a disturbing five-year trend of increasing crime. Particularly concerning is an irrefutable 97% surge of violent crime in the downtown neighborhood that includes Chicago jewels like the central business district, theater district, and Millenium Park.

Further research by our team found that while the number of tourists, residents, crimes, and 911 calls for police service are increasing in the Loop, Mayor Rahm Emanuel’s administration has cut police manpower in the district responsible for its security.

Standing on the corner of Wacker and Wabash, one enjoys Chicago’s postcard view. The soaring Trump Tower, the bridges, the river—it’s the sight you came here to see.

Then there’s the staircase. Located next to a bustling 7-Eleven and across the street from the tourist-friendly Hotel Monaco and Virgin Hotel, the iron-wrapped stairs lead down to a much different view of Chicago. It was at the bottom of these stairs that shots rang out during a suspected mid-afternoon drug deal on February 2, according to police.

CPD tactical units have been detailed to clean up the area at the bottom of the stairs constantly since the shooting.

It was down there, during a post-shooting clean-up mission last Tuesday afternoon, that a Chicago police tactical team tried to stop four-time convicted felon Shomari Legghette to talk to him about drug deals and the February 2 shooting. Legghette ran up the staircase and bolted, eventually shooting Bauer to death at the bottom of a different staircase outside the Thompson Center.

The Loop’s problems may be well-represented by that slice of Wacker Drive, but there are plenty of other headaches to be fixed—problems that have been allowed to grow for too long in some estimations.

Even though an alderman rightly cites the drug markets as a problem, narcotics arrests in 2017 declined for the fifth consecutive year in the Loop. There were just 74 arrests for drugs compared to 214 five years before. But the Loop is not alone. Nearly every neighborhood we studied has seen sharp declines in drug-related arrests in recent years as society’s attitudes toward cannabis evolve and cops pull back on conducting street stops. 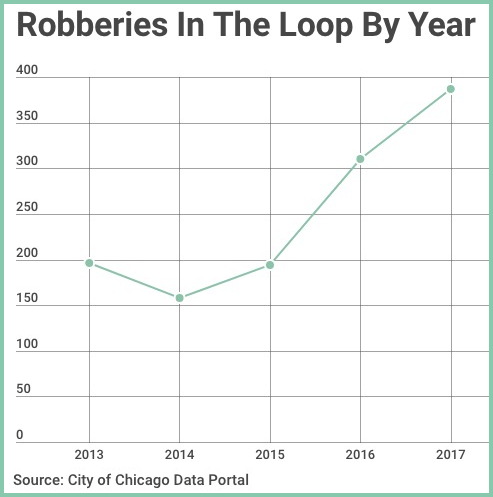 There may be no better measure of a neighborhood’s overall safety than its robbery statistics. Robbery, or muggings, are typically violent street crimes between strangers on the street.

Overall violent crime, which includes homicides, aggravated batteries, robberies, and criminal sexual assaults, reached a five-year high in the Loop last year, with 547 cases reported. That’s also up 97% since 2013 and up 22% from the year before. Robberies were the driving force, accounting for nearly 71% of the Loop’s violent crime total. 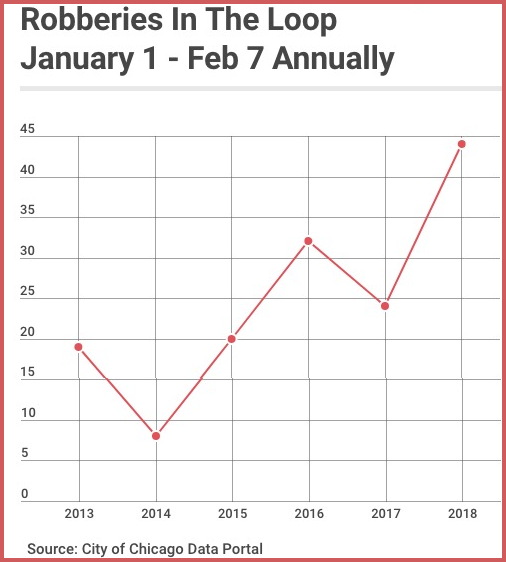 Overall, There were 10,539 crimes reported in the Loop last year, by far the highest number in the past five years: up 17% compared to the year before and up 35% compared to 2013.

The Need To Adapt

Chicago’s Loop has evolved in recent years. More people are living there. More tourists are staying in hotels there. But is the city adapting to changes in the neighborhood? Are police executives deploying effective strategies to counter patterns such as the Loop’s incredible robbery surge? The answer would appear to be “no.” 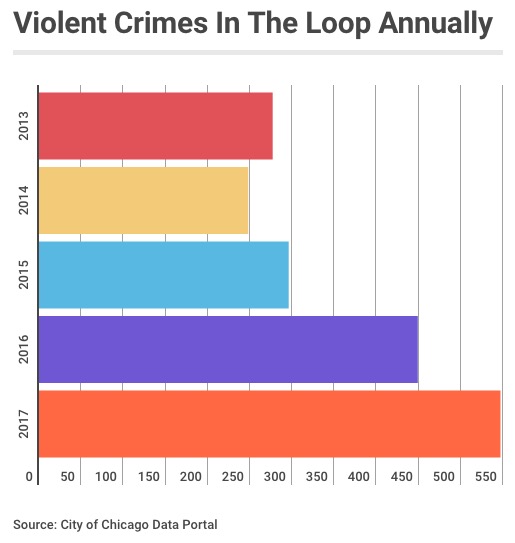 You read that right. Despite all of the changes in the Loop. Despite all of the press releases and photo ops about new cops going to the streets. Despite Emanuel’s repeated pledges to “put more cops on the beat.”  Despite the 97% increase in robberies and violent crime overall, the Loop has lost 26 officers on Emanuel’s watch.

It seems that mayor’s equation for success in the Loop is to add tourists, add residents, add 911 calls, and subtract cops. That’s not working.

Note: The “Violent Crimes In The Loop Annually” graph was added post-publication to better illustrate the content of this report.

Original reporting seen nowhere else. Please support our work by contributing to CWBChicago’s operating fund. Donate $49 or more to receive a year’s worth of exclusive reports and services.
———-
Email      Facebook       Twitter       YouTube
About CWBChicago 4360 Articles
CWBChicago was created in 2013 by five residents of Wrigleyville and Boystown who had grown disheartened with inaccurate information that was being provided at local Community Policing (CAPS) meetings. Our coverage area has expanded since then to cover Lincoln Park, River North, The Loop, Uptown, and other North Side Areas. But our mission remains unchanged: To provide original public safety reporting with better context and greater detail than mainstream media outlets.
Website Facebook Twitter YouTube