Police are investigating an armed robbery reported on the Boystown bar strip late Sunday evening. No one is in custody. 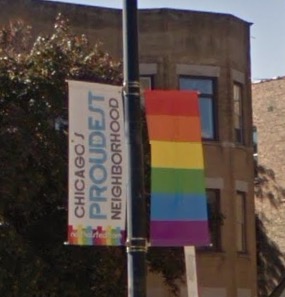 A resident of the 800 block of West Newport called police shortly before midnight to report that an unknown man was on their back porch, looking scared, out of breath and asking for someone to call the police. They later learned that he had just been robbed.

The 24-year-old man told police that he was near Newport and Halsted when an unknown offender approached him, pulled out a handgun, and demanded his property. After getting about $100 cash and the man’s phone, the suspect ran away.

The victim told police that he remembered seeing the suspect standing outside of Progress Bar on the corner of Halsted and Roscoe shortly before being robbed. He described the offender as male, black, about 35-years-old, and 5’11” tall wearing a blue coat with fur around the hood.

An ambulance crew treated the victim for shortness of breath.

Last night’s robbery is the seventh of the month for Wrigleyville and Boystown. That’s on-pace with March of last year and below March’s 17-year average of 10.1 hold-ups.

The three-month period ending February 28 recorded the fewest robbery cases in the neighborhood of any December-February period since at least the year 2000. Only 15 hold-ups were reported during the latest three-month period, a remarkable turn-around from the terrible years of 2011, 2012, and 2013 when the area held the distinction of being the worst neighborhood for robberies in the entire city.

Exclusive reporting for Boystown residents and businesses. We can only do it with your support. Subscribe for just $49 a year or $5 a month to receive members-only reports and services.