Welcome to another edition of “Monday Gunday,” our weekly review of recent  firearms cases and how the allegations have been handled by Cook County’s court system: 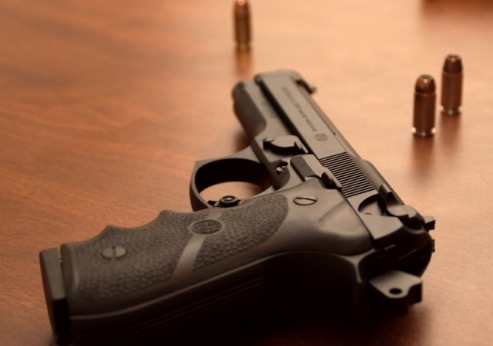 First up, a verdict: Kelly Hoard, accused of trying to carry a firearm into a federal passport office in the Loop on January 5, has pleaded guilty to disorderly conduct. Judge Anthony Calabrese sentenced her to six months court supervision and dropped the weapons charge against her.

• A group of cops who were standing in line at Portillo’s, 520 West Taylor Street, noticed that the man in front of them had a gun with an extended magazine sticking out of his waistband last Saturday evening, according to court records. The cops secured the 40-caliber handgun and arrested 20-year-old Lapre Apple of Indianapolis. While processing Apple, cops say they found 350 suspected ecstasy pills and $3,202 cash in Apple’s pockets. He’s charged with felony unlawful use of a concealed weapon, felony possession of ecstasy and possession of a high-capacity magazine.

Apple reportedly told police that he has a concealed carry license in Indiana. Police informed him that he was in Illinois, where his out-of-state permit is not valid. Judge Michael Clancy set bail at $20,000, which means Apple quickly posted a $2,000 deposit go free before trial.

• Police conducting an anti-robbery mission in the 5600 block of North Rockwell said they saw convicted felon Alfredo Delgado evading them and walking into and out of gangways around 9:45 a.m. on February 28.

Officers stopped Delgado and allegedly saw a 9-millimeter handgun weighing down his front hoodie pocket. As they recovered the gun, Delgado put his hands in the air and said, “It’s yours man. I’m not gonna fight with you,” police said. Police say Delgado told them that he carries the gun for protection because there is a lot of vehicle traffic in his alley lately.

Delgado, 41-year-old Latin King gang member according to police, was charged with being a felon in possession of a firearm.

Judge Sylvia Atcherson initially set bail at $5,000, meaning that Delgado could go free by posting $500. In a court hearing last Wednesday, Delgado’s lawyer asked Judge Charles Beach to reduce bail. Instead, Beach quintupled it to $25,000. Beach, formerly assigned to the Traffic Court division, is up for election this month.

• Juancho Padolina, 51, is accused of threatening two people with a handgun near Peterson and Western last Tuesday night. Charged with aggravated unlawful use of a weapon without a Firearms Owner ID (FOID) card, two counts of aggravated assault with a deadly weapon, and possession of a mounted laser sight, his bail was set at $10,000 by Judge Michael Clancy. Padolina can go free before trial by posting a $1,000 deposit.

Back CWB’s reporting team and we’ll reward you with members-only reports and services all year long. Join HERE.
———-
Email      Facebook       Twitter       YouTube
About CWBChicago 4360 Articles
CWBChicago was created in 2013 by five residents of Wrigleyville and Boystown who had grown disheartened with inaccurate information that was being provided at local Community Policing (CAPS) meetings. Our coverage area has expanded since then to cover Lincoln Park, River North, The Loop, Uptown, and other North Side Areas. But our mission remains unchanged: To provide original public safety reporting with better context and greater detail than mainstream media outlets.
Website Facebook Twitter YouTube