Chicago police tonight said that no one is yet in custody for attacking a 15-year-old boy at the Lane Tech High School Memorial Day carnival on Saturday evening. Detectives continue to investigate.

Also tonight, a concerned parent provided us with a cellphone video taken of the attack.

It is gut-wrenching footage that ends with a close-up of the victim as he lies unconscious on the grass outside of the school, apparently being shield by a friend from further attack.

Close-up images of the victim have been removed from the footage:

A police spokesman this weekend said that the victim tried to prevent a friend’s bike from being stolen by a group of 15 to 20 teenagers. The boy was surrounded by the group of offenders who struck the boy repeatedly while he was on the ground, police said. The victim was transported to Lurie Children’s Hospital.

The source of the video said she received it from her daughter who said it is one of many videos from the incident that made the rounds on social media last weekend.

“It amazes me that this video isn’t out there,” the parent said in a message to us. “I gave it to a reporter the next day.”

Screengrabs from the video are posted below. Some of the participants appear to be trying to break up the attack or fight off the people who initially jumped the victim. 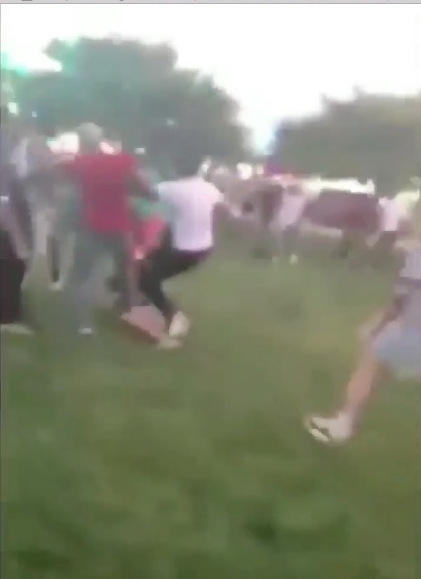 NOTE: In the original video, the man seen kneeling below appears to be protecting the unconscious victim from further attacks. Exclusive, original reporting for Lakeview. We can only do it with your support. Subscribe for just $49 a year or $5 a month to receive members-only reports and services. Or, name your own amount. The choice is yours. Thanks so much!
———-
Email      Facebook       Twitter       YouTube
About CWBChicago 4360 Articles
CWBChicago was created in 2013 by five residents of Wrigleyville and Boystown who had grown disheartened with inaccurate information that was being provided at local Community Policing (CAPS) meetings. Our coverage area has expanded since then to cover Lincoln Park, River North, The Loop, Uptown, and other North Side Areas. But our mission remains unchanged: To provide original public safety reporting with better context and greater detail than mainstream media outlets.
Website Facebook Twitter YouTube