Police scored success last month in fighting the Loop’s growing robbery problem, but officers in the adjacent Near North neighborhood have not had the same results. Muggings in both downtown neighborhoods remain sharply elevated. 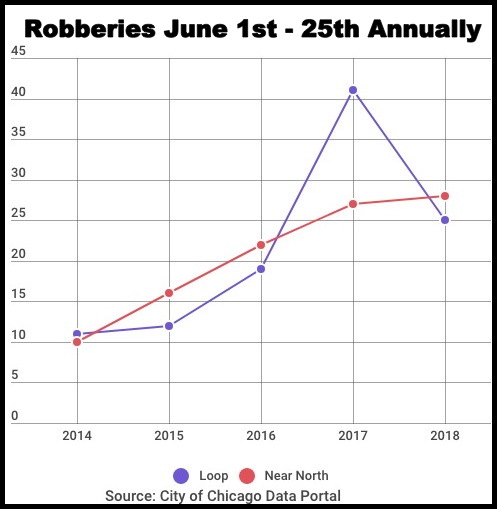 Through June 25, the Loop had recorded 25 robberies for the month. That compares to 40 during the same timeframe last year. Near North saw 28 robberies through June 25th, up by one over last year.

Cops in both neighborhoods are working to reverse a three-year upsurge in robbery cases that went unaddressed until media attention was focused on the problem late last year.

As of June 25, there were 173 robberies reported in the Loop this year. Near North had one fewer case. Those numbers are significantly higher than in 2014 and 2015, the last two years before the mugging rate began climbing.

Here are details on some recent robberies in the downtown area:

• A 15-year-old boy told police that he was robbed at gunpoint around 3:30 p.m. Tuesday in the parking garage at Target, 1200 North Larrabee. Four offenders in a dark blue Chrysler drove up to the boy, and one passenger pulled out a handgun while demanding his phone, the victim said. Officers who reviewed surveillance video said the car has an Uber TNP decal and a Lyft sticker in its back window. No offender description was available. 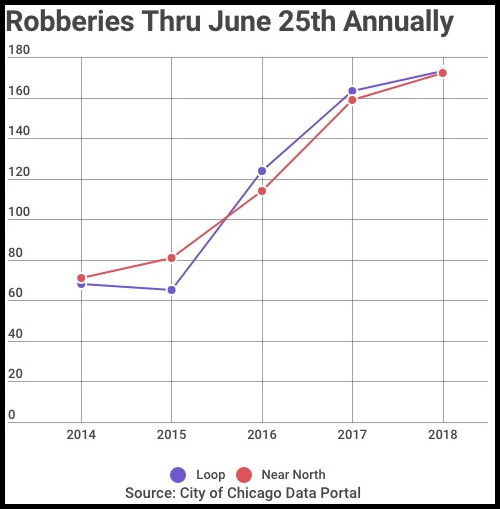 • A dark Chrysler was also the vehicle of choice in an incident downtown on Monday evening. The victim told police a man emerged from a black Chrysler 300 and swiped his phone at 200 East Randolph around 8:30 p.m. The primary offender is a black male in his late teens or early 20’s who was wearing red shorts. The car had Missouri license plates.

• Police said a 30-year-old woman was knocked to the ground, repeatedly kicked in the head, and robbed near State and Kinzie Sunday evening. After attacking the woman around 8:30 p.m. in the first block of West Kinzie, the offenders took the woman’s phone and ran, according to police. The victim said that the robbery may be connected to a verbal altercation she had with some people inside the House of Blues earlier that night. The woman sought treatment for cuts, bruises, and swelling at St. Joseph’s Hospital. Police did not offer any offender descriptions.

• One of Chicago’s famous “Apple pickers” swiped a woman’s iPhone as she used it to take a picture outside of the Hampton Inn Majestic on Sunday evening. The woman was snapping a photo around 9 p.m. when a group of three men ran by, and one of them grabbed her iPhone from her hand at 22 West Monroe. Police determined that the offenders later jumped the turnstile at the Monroe Red Line station and left the area. The primary offender was described as a black male in his late teens or early 20’s who was wearing a white tank top.

• A Loop resident was robbed at gunpoint Sunday morning in the 1100 block of South Plymouth. The woman told police that four men confronted her on the street and implied that they were armed. The men took her wallet and a grocery bag that contained a Chromebook and an iPad before running away southbound around 4:30 a.m. The victim said one offender was a black man with dreadlocks who wore black shorts and a black shirt.