Sixteen. That is the final arrest count for the 2018 Chicago Pride Parade and its aftermath on June 24th. That’s the lowest arrest count recorded since CWBChicago began compiling arrest data in 2013.

Only three of the arrests were made while the parade was underway. The balance occurred during post-parade mayhem along Belmont and Halsted streets, according to an analysis of Chicago Police Department arrest data and court records. 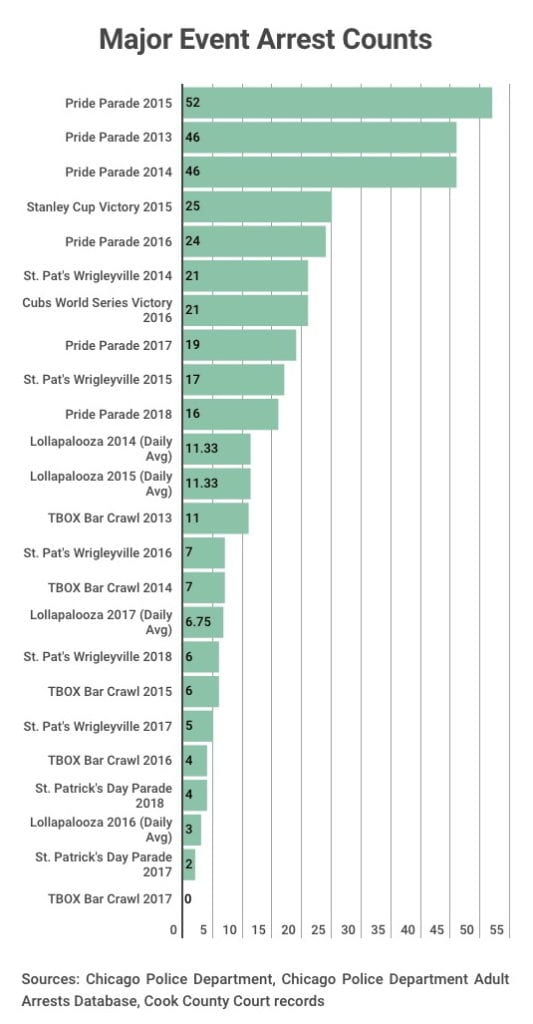 Battery was the primary charge for six arrests. Other arrests stemmed from reckless conduct, disorderly conduct, criminal damage to property and assault.

As of last Friday afternoon, complete court records were available for only seven of the arrests. Here is a summary of the allegations made against the arrestees.

• Mark Beamon, 21, is charged with four counts of battery and one count of criminal damage to property stemming from an incident in the 3400 block of North Halsted at 3:25 p.m. Beamon is accused of punching or shoving three juveniles and an adult and breaking a phone during a dispute over space along the parade route, according to court records.

• Breah Bedford, 18, Freddie Gordon, 21, and 20-year-old Simone Jones face various charges in connection with a brawl outside of Big City Tap, 1010 West Belmont, around 9:30 p.m. More information about the incident is available here, here, and here.

• Robert Bowman and James McCormack, both 27, were arrested in the 3500 block of North Halsted at 5:30 p.m. after a motorist reported that the men repeatedly punched his Jeep, forming dents on the hood. McCormack and Bowman are charged with criminal damage to property.

• Shaniquwa Britton, 25, and Desiree Richards, 23,  are charged with disorderly conduct. Police said they saw the two arguing and fighting in the parking lot of Circle K, 801 West Addison, around 10 p.m. The two were “causing unruly crowds to gather, enticing further violence,” police said. The officers told the women to go their separate ways. Both were arrested a few moments later when they returned and began battering each other again, according to court records.

• Clarence Davis, 28, was arrested at the Circle K after he began “throwing punches…causing a crowd to gather and inciting the crowd” around 11 p.m., according to a police report. He’s charged with reckless conduct.

• Deangelo Gardner, 26, was arrested in the 900 block of West Belmont at 2 a.m. on June 25th and charged with disorderly conduct, according to court records. In a police report, cops said that Gardner ignored several orders to disperse while a “large crowd” was throwing bottles at officers.

• Keshode Humphries, 18, was arrested at 3201 North Halsted around 11 p.m. on Sunday after police said they saw him spray a 28-year-old man in the face with pepper spray. He’s charged with battery.

• Jacob Jones is accused of punching a 36-year-old woman in her head repeatedly, causing her to fall to the ground and strike her head on the sidewalk in the 900 block of West Fletcher around 9:45 p.m., according to court records. The 31-year-old is charged with one count of battery.

• Meyata May, 26, of Clarksville, Tenn., is charged with reckless conduct. Police said they were responding to a fight in the 900 block of West Belmont around 8 p.m. when they saw her “sparking” a stun gun repeatedly in a crowd of 100 people. Officers reported recovering a pink Super Cute-brand stun gun on the ground next to May.

• Everardo Salgado, 25, was arrested in the 900 block of West Belmont around 8:20 p.m. on Sunday. Two police officers allege that Salgado approached them with clenched fists and said “I am going to beat your ass. I am going to knock your ass out.” He is charged with two counts of assault.

• Joshua Thomas, 21, was arrested in the 3200 block of North Clark at 3:30 p.m. Police said they were issuing Thomas a citation for drinking a bottle of vodka on the public way when he suddenly took off running into oncoming traffic. He is charged with reckless conduct and drinking alcohol on the public way.

We will update this post as more police records are released.

As we reported on the morning after this year’s parade, the 2018 march lasted 4 hours and 43 minutes from start to finish. That’s a minute longer than the 2015 installment.

The city, working with parade organizers, slashed the number of entries from 250 to 150 beginning in 2016. Yet, somehow, the parade continues to slog on for hours.

Indications are that parade organizers are “teaming up” units. So, instead of two separate entries, multiple groups are being combined into a single, larger “unit.” Anecdotally, people have reported that when the parade line-up is “full,” potential marchers have been asked to join other groups.

The result? While there may be only 150 official units, the entries may be larger than before. That, in turn, is causing the parade to continue to drag on.

There also continue to be sizeable gaps in the march. Many of these time-killing lulls popped up in the politicians’ contingent as elected officials tried to create space between themselves and the group in front of them. Alderman Roberto Maldonado (26th) allowed a half-block gap to develop between his parade banner and the group in front of him. Skeptics suggest the purpose of such gaps is to give spectators clear views of banners bearing the politicians’ names.