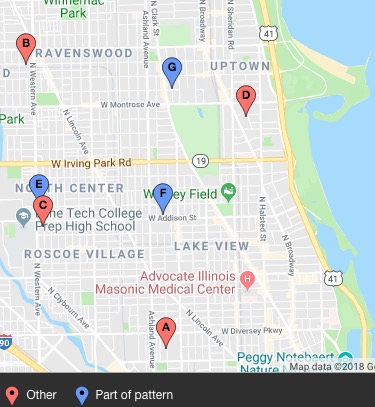 Three carjackings were reported on Tuesday in the North Side’s 19th (Town Hall) Police District, including two within five minutes around 9 p.m. The latest incidents are at least the sixth and seventh to be reported in the police district since Oct.1st, according to city data.

Around 9 p.m., a Missouri man was forced out of his car by three offenders in the 2400 block of West Leland in Lincoln Square. The victim told police that three offenders got out of a gray sedan and forced him from his Toyota Corolla, which was last seen eastbound on Leland. The stolen vehicle bears a Missouri license plate.

At nearly the same time, a woman was dragged out of her car by two men in the 2600 block of North Greenview in Lincoln Park. The vehicle, a dark blue Kia SUV bearing a license plate that starts with AY966, was last seen southbound. 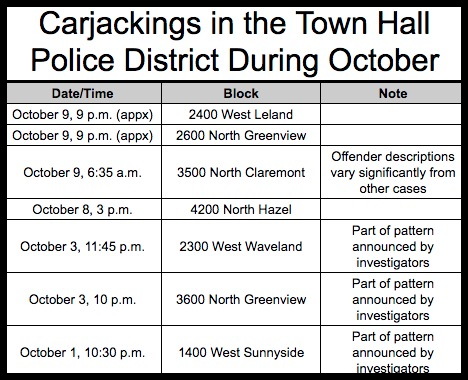 The Lincoln Park victim described the offenders as two black men between 17- and 20-years-old. One was 5’11” tall and the other was about 5’8” tall.

Earlier on Tuesday, police said a 38-year-old man was forced out of his vehicle at gunpoint by three young males in the 3500 block of North Claremont at 6:35 a.m. Taken was a silver four-door 2008 Hyundai Sonata bearing a license plate that begins with XJ688. It was last seen heading south on Claremont.

On Monday, a driver was hit in the back of the head and carjacked as he sat in his car in the 4200 block of North Hazel in Uptown. That case involved three black males between 18- and 20-years-old who were wearing dark hoodies and jeans.

Late last week, police said in a community alert that a robbery team is likely responsible for three carjackings elsewhere in the district between October 1st and October 3rd. The alert describes the robbers as two to five black males between the ages of 20 and 30.

• Around 10:30 p.m. on October 1st, a 65-year-old Skokie man was carjacked at gunpoint as he sat in his car in the 1400 block of West Sunnyside. Three men ordered from his vehicle at gunpoint and then sped away northbound on Clark Street. Police said the stolen car is a four-door black 2012 Hyundai Sonata. Its license plate begins with E9099.

• About 15 minutes later, a 40-year-old man was sitting in a parked car in the 3600 block of North Greenview when three men stepped out of a Lexus SUV and announced a robbery while implying that they had a weapon, police said. The robbers took the man’s wallet and phone, then drove away with his car. The tan 2013 Kia Optima with a license plate beginning with “AK322” was last seen heading east on Waveland followed by the Lexus.

• Finally, around 11:45 p.m., a man walked into Area North Police Headquarters at Belmont and Western to report that he had just been carjacked nearby. The man told police that he was sitting in a BMW X5-M in the 2300 block of West Waveland when three men forced him from the car at gunpoint. The robbers were last seen driving southbound on Western. Also lost to the crew were the man’s backpack, phone, bike, and camera, according to a report. The stolen vehicle is a dark blue 2010 model with a plate that begins with “3612.”

The community alert describes the robbers as two to five black males between the ages of 20 and 30.

Anyone with information about these crimes or the suspects may contact Area North Detectives at 312-744-8263.

Near North Carjacking
A run-of-the-mill auto theft escalated into a carjacking on Tuesday evening in the 1000 block of North Rush Street, police said.

A 30-year-old man left his 2015 Mercedes unattended with the doors unlocked and the keys inside, police said. When a thief and a passenger got into the car, the victim tried to stop the offender from driving away and wound up getting dragged by the car as it sped away. Police said the man suffered bruising and his condition had been stabilized at Northwestern Memorial Hospital.

Police said an “adult cyclist” suffered minor injuries when they were struck by the fleeing car. One suspect was later taken into custody and charges are pending, police said.

Exclusive, original reporting. We can only do it with your support. Subscribe for just $49 a year or $5 a month to receive members-only reports and services. Or, name your own amount. The choice is yours. Thanks so much!
———-
Email      Facebook       Twitter       YouTube
About CWBChicago 4360 Articles
CWBChicago was created in 2013 by five residents of Wrigleyville and Boystown who had grown disheartened with inaccurate information that was being provided at local Community Policing (CAPS) meetings. Our coverage area has expanded since then to cover Lincoln Park, River North, The Loop, Uptown, and other North Side Areas. But our mission remains unchanged: To provide original public safety reporting with better context and greater detail than mainstream media outlets.
Website Facebook Twitter YouTube