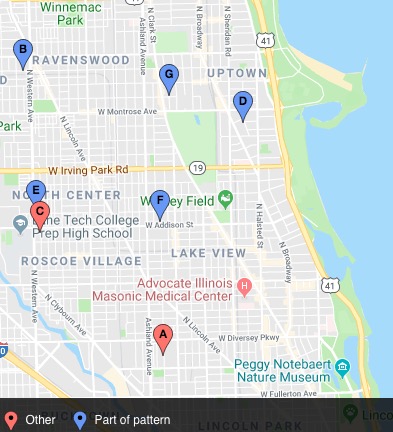 Chicago police this afternoon issued an update to their earlier warning about carjackings and robberies in the Town Hall (19th) Police District. As CWBChicago has been reporting, Town Hall officers have handled at least seven carjackings since October 1st.

The new alert indicates that at least five of the seven carjackings are connected to one robbery team. Detectives usually issue community alerts when they believe one person or group is responsible for committing a series of crimes. 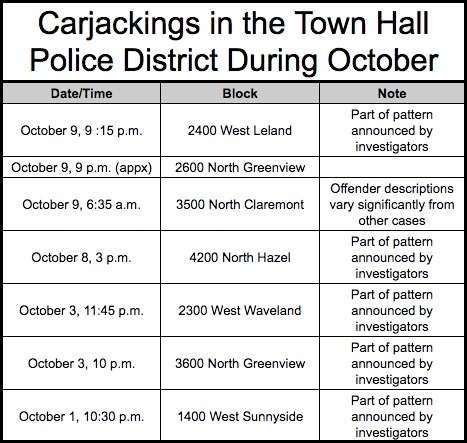 Police said the carjacking team’s method of operation is to approach victims while they are alone in their cars or, in one case, on the street. Victims are ordered out of their vehicles, sometimes at gunpoint, police said.

Here are the latest incidents added to the detectives’ list (click each entry for CWBChicago’s original reporting):

Investigators previously announced these four cases were part of the pattern:

Police said the offenders involved in the pattern are two to five black men between the ages of 20 and 30. Anyone with information about the crimes may contact Area North detectives at 312-744-8263

At least two other carjackings reported in the Town Hall District since October 1st have not been publicly connected to the pattern.

No description was available for offenders in the Oct. 9th carjacking on Greenview. The carjackers on Claremont were described as Hispanic males between 16- and 20-years-old who stand 5’6” to 5’8” tall and weight 130 to 150 pounds.