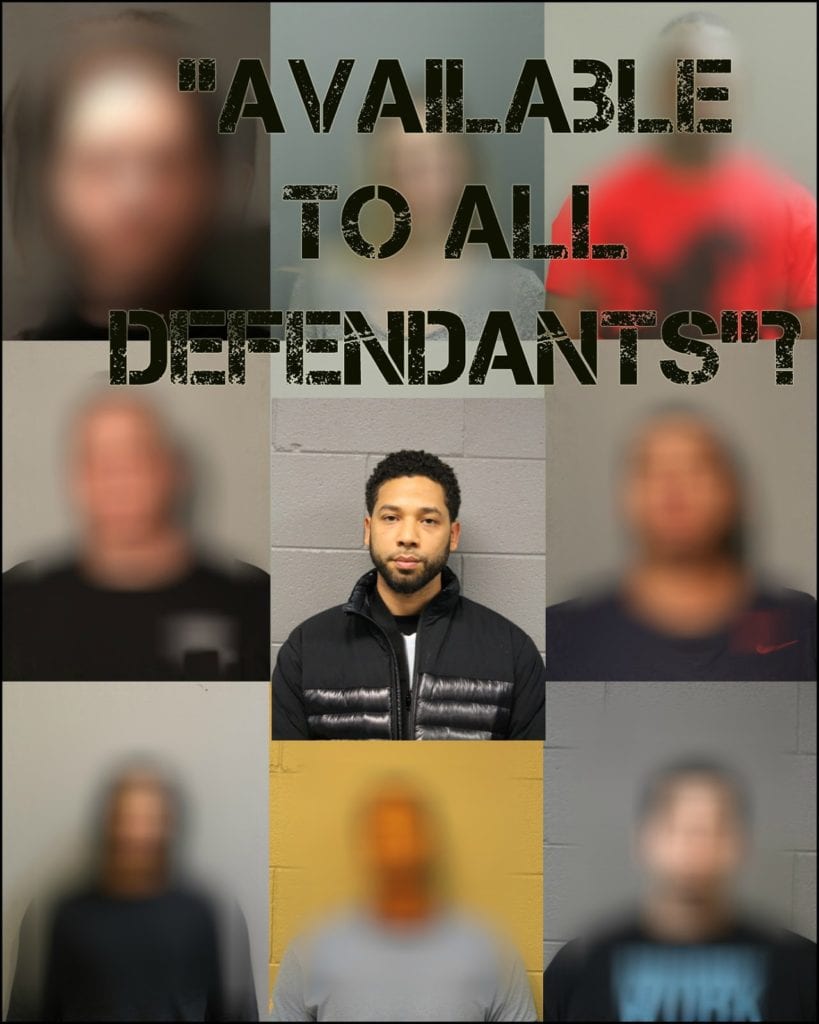 Is that true? Not so much, according to court files that document what has happened to other defendants who’ve allegedly filed run-of-the-mill false reports with Chicago police. CWBChicago today pulled Chicago Police Department and Cook County Court Clerk records to see just how comparable Smollett’s case outcome is other citizens’ cases.

Foxx spokesperson Tandra Simonton claimed the Smollett resolution “is not a new or unusual practice.”

But Eric Sussman, who once served as Foxx’s top deputy, had a different take:  “I’ve never, ever seen anything like this.”

If Smollett’s resolution “is available to all defendants” and “not a new or unusual practice,” then there are a bunch of people pleading guilty and saddling themselves with lifetime criminal records for no apparent reason. Here are the details of those cases and their court dispositions: 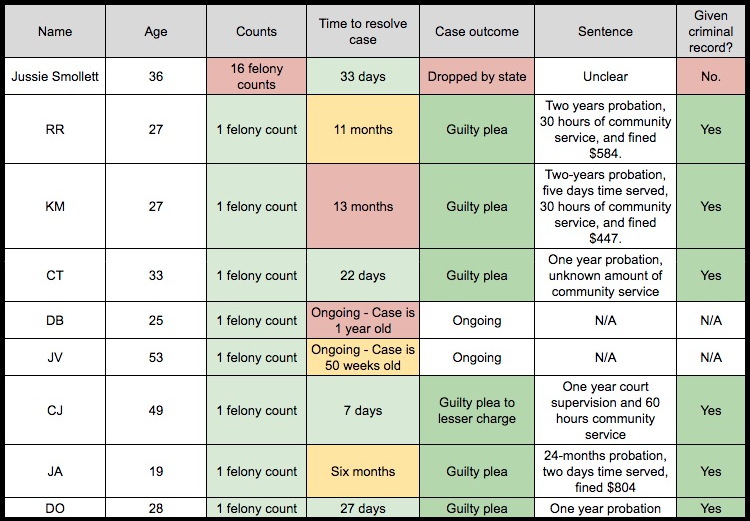 CWBChicago researchers today located eight recent cases that align closely with Smollett’s. Like Smollett, each of these individuals had no prior adult criminal charges in Cook County. The alleged incidents took place in Chicago and were handled by Chicago police. Each defendant was charged with only one crime: a single felony count of disorderly conduct-filing a false police report (720 ILCS 5.0/26-1-A-4). Smollett was charged with sixteen counts under the same statute.

Here’s what happened in those cases:

Police alleged that Smollett falsely reported being beaten, doused with bleach, and wrapped in a noose by two masked white men who yelled anti-black, anti-gay slurs while announcing “this is MAGA country.” Associates of Smollett, a TV actor, leaked the story to a well-known gossip website within 10 hours, which put a spotlight on the matter. The ensuing police investigation lasted three weeks and involved the work of at least 12 full-time detectives, according to CPD. Smollett maintains his innocence.

Days to resolution: 33
Outcome: Unknown. Court file was sealed immediately. Smollett did not plead guilty to any crime. Prosecutors said he agreed to give his $10,000 deposit bond to the city of Chicago. There is conflicting information about whether or not approximately 16 hours spent at the Rainbow PUSH Coalition on March 23rd and 25th was community service and further confusion about whether that possible service was part of the case resolution.

Tourists RR and KM were accused of falsely reporting to Chicago police that they were robbed of $20,000 in cash and property when their GPS led them into Lower Wacker Drive.

Days to resolution: 11 months (RR), 13 months (KM)
Outcome: RR pleaded guilty and was sentenced to two-years probation, 30 hours of community service, and fined $584. KM also pleaded guilty. She was sentenced to two-years probation, five days time served, 30 hours of community service, and she was fined $447. Both will have criminal records in Cook County.

Chicago police allege that CT falsely reported that his Audi had been stolen with his 7-year-old daughter sleeping in the back seat. Investigators found that the story was false and CT admitted to lying after receiving his Miranda warning.

Days to resolution: 22
Outcome: CT pleaded guilty and was sentenced to one-year probation and an unknown number of community service hours. Because he was required to plead guilty, he has a criminal record.

Police say DB was the passenger in a vehicle they pulled over for a traffic violation. During the stop, the driver sped off and crashed into a barricade. DB jumped out of the car, ran home, changed into his Chicago Transit Authority uniform, then called 911 to report that his car—the one that had crashed into the barricade—had been carjacked at gunpoint, according to police. Arriving officers were allegedly told by DB that four men carjacked him and two of them drove away with his vehicle. When police told DB that they knew he was lying, he admitted that he was the guy in the passenger seat of the car when it crashed, according to court records.

Days to resolution: Ongoing. The case will be a year old on Friday.

JV reported that he had been restrained, battered, and robbed at gunpoint in the manager’s office of a restaurant that he operates. Police alleged that an investigation involving video review and witness statements revealed that no crime occurred. When confronted with the accusations, JV asked for an attorney, police said.

Days to resolution: Ongoing. The case is 50 weeks old.

Days to resolution: 7 days
Outcome: Prosecutors reduced the charge from a felony to a misdemeanor. CJ pleaded guilty and was sentenced to one year of court supervision and 60 hours of community service. Because she was required to plead guilty, she has a criminal record.

Police say JA called 911, reported being robbed at gunpoint, and provided officers with a detailed description of the offender. Cops stopped a man matching the description and asked her to identify him. That’s when police learned that the “robber” was JA’s boyfriend and that she called in a fake robbery because he cheated on her and she was angry, according to court records. JA further stated that she didn’t think that police would actually take her seriously.

Prosecutors said DO reported a false kidnapping. No further details were available in the case file. DO was arrested on the same day that the allegedly false report was made.

Days to resolution: 27 days
Outcome: Guilty plea. Sentenced to probation for a year.

Police said MA falsely reported that he was robbed at gunpoint while taking proceeds from a restaurant that he manages to the bank.

Chicago police alleged AK called 911 and falsely reported that he saw a man drop a gun in a White Castle men’s room. He provided a full description of the man and said the armed offender was standing outside the restaurant, police said. AK later admitted that the report was false, according to his arrest report.

DG was accused of telling police that he had been battered by a group of black men who displayed a gun outside of Wrigley Field. Police said they reviewed surveillance video that showed his claim to be false.

Days to resolution: 98
Outcome: Prosecutors dropped the case after DG completed 20 hours of community service. He was not required to plead guilty. The case has not been expunged or sealed.

Some other differences between Smollett’s case resolution and the route taken by ordinary people are apparent. Smollett’s case was concluded in an “emergency hearing” rather than at his next scheduled court date on April 17th.

According to Cook County Circuit Court guidelines, emergency motions require “sudden or unforeseen circumstances” that “rise to the [level of] emergency.” Attorneys seeking an emergency hearing are required to explain “the reason(s) the matter should take precedence.”

Particularly odd was the decision to immediately seal Smollett’s court record. Even when individuals are acquitted of crimes, the court record remains accessible to the public until the individual seeks expungement—a 60- to 120-day process that entities such as the Chicago Police Department have an opportunity to contest.

But Smollett’s judge yesterday immediately sealed the case, and the case was removed from clerk electronic records within four hours, barring anyone from reviewing the matter. Foxx today said the sealing was an error that would be undone. As of midday on Wednesday, Smollett’s case had not returned to the clerk’s system.

Supervising prosecutors in Foxx’s office received the following email on Wednesday afternoon, seeking help in identifying felony defendants who had received treatment similar to Smollett’s. We’re not sure why the email would be necessary if Smollett’s handling has been “available to all defendants.” 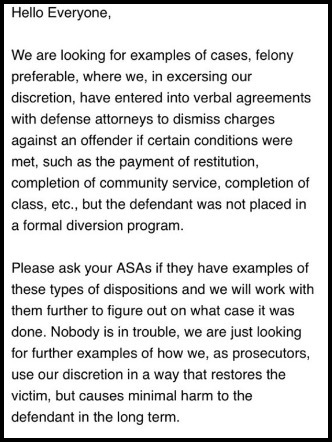 Editor’s note: In fairness to the accused parties, we opted to refer to them by their initials only.
—————–
Our exclusive and original reporting is 100% reader-funded. Please make a contribution to our operating fund or purchase a subscription today.