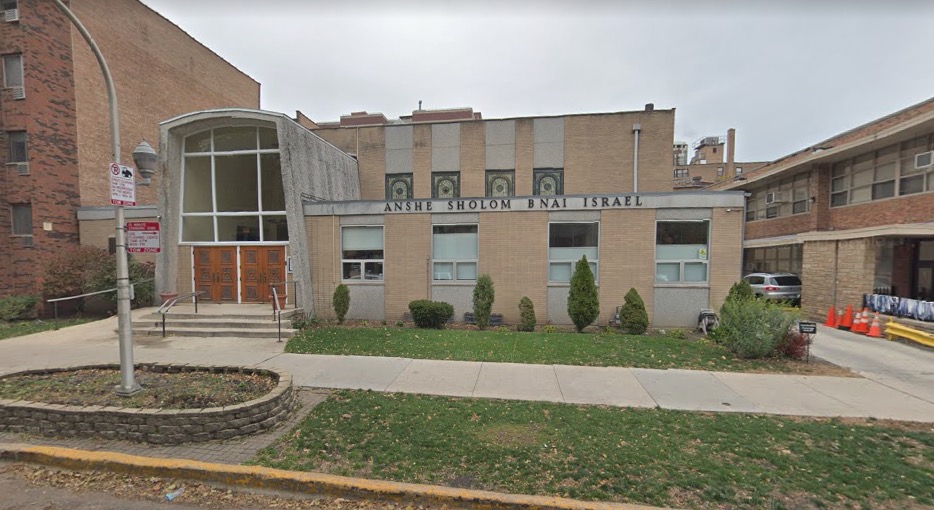 NEW: Image of suspect released. See here.
———–
Chicago Police Deputy Supt. Anthony Riccio tonight ordered police to pay special attention to all Jewish schools, synagogues, and businesses after an attempted arson in Lakeview and criminal damage to vehicles on the Far North Side.

As CWBChicago reported earlier, Chicago police and the FBI are investigating after an apparent arson attempt was made at a Lakeview synagogue late Saturday night or early Sunday, according to CPD and a letter from Rabbi David Wolkenfeld of Anshe Sholom B’nai Israel Congregation, 540 West Melrose. The building was not damaged, and no injuries were reported according to police and Wolkenfeld.

“The remains of several incendiary devices were found on the perimeter of our shul,” Wolkenfeld wrote. Security footage “revealed that an individual entered the shul parking lot shortly after midnight and attempted to commit an act of arson.”

Wolkenfeld said, “the police are not aware of any specific threat targeting our building or community.”

Three broken glass bottles that contained an unknown substance were recovered along with charred black cloth towels, according to Chicago police.

Guglielmi also said tonight that police are investigating a pattern of cars having windows smashed outside of synagogues in the 24th (Rogers Park) Police District. The department earlier on Sunday issued an alert about vehicles having windows broken with bricks or rocks in the 24th and 20th (Lincoln) Police Districts. Guglielmi tonight confirmed that some of the crimes mentioned in the alert may be connected to nearby Jewish establishments.

The alert said a man or men wearing long hooded jackets, dark pants, and light colored gym shoes had broken windows of parked cars at the following locations and times:

The alert did not specify which of the incidents took place near Jewish establishments.

Police believe different persons or groups are responsible for the Lakeview and Rogers Park crimes, Guglielmi said. He encouraged anyone with information about the incidents to submit tips anonymously via www.cpdtip com
——

Facts first. 100% reader-funded. No influencers. Click here to support CWBChicago today.
———-
Email      Facebook       Twitter       YouTube
About CWBChicago 4360 Articles
CWBChicago was created in 2013 by five residents of Wrigleyville and Boystown who had grown disheartened with inaccurate information that was being provided at local Community Policing (CAPS) meetings. Our coverage area has expanded since then to cover Lincoln Park, River North, The Loop, Uptown, and other North Side Areas. But our mission remains unchanged: To provide original public safety reporting with better context and greater detail than mainstream media outlets.
Website Facebook Twitter YouTube