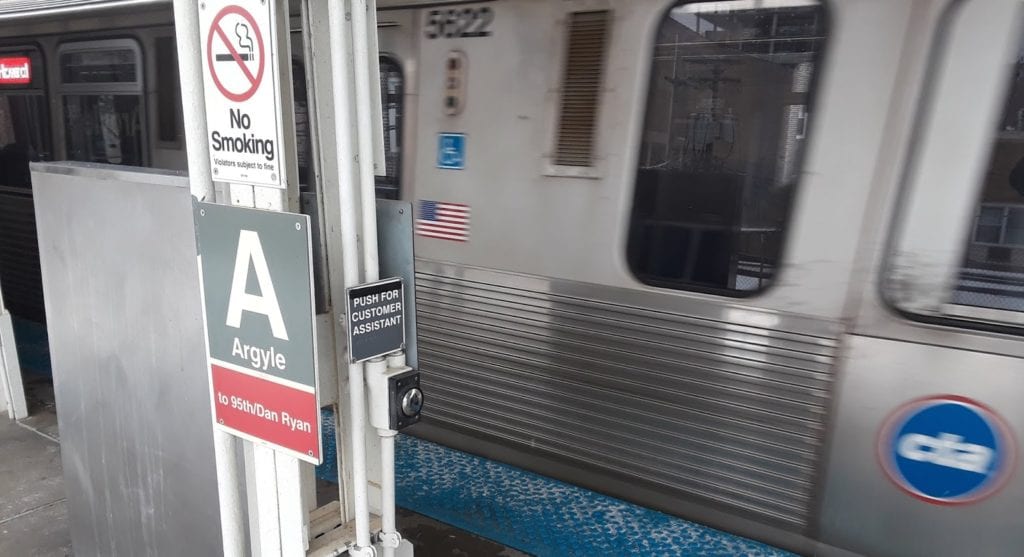 One man is in critical condition, and another escaped with minor injuries in a double-shooting at the Argyle Red Line station on Monday afternoon, police said.

The men are the sixth and seventh persons shot in Uptown since a gang war was re-kindled with a double shooting about a block from the CTA station on March 19th.

A police department source said officers witnesses some or all of Monday’s shooting via surveillance cameras.

Police said the men were on the Argyle platform shortly after 4 p.m. when both were shot.

A 34-year-old man was struck in the back, stomach, buttocks, and groin, police said. He was taken to St. Francis Hospital in critical condition. The second victim, a 41-year-old man, suffered a graze wound and declined medical treatment. Eight shell casings were found on the Argyle station platform. Additional shots were fired at ground level.

The critically-wounded man is a known gang member who has been frequently arrested along Argyle Avenue, most recently in January for gang loitering about 30 feet from the train station, according to police records.

A police officer who was monitoring nearby surveillance cameras at the time of today’s shooting said he saw a suspect running from the scene with a gun in his hand. The man is described as black and “very young,” possibly 18-years-old. He was wearing dark pants and a dark jogging jacket or shirt with three white stripes down the sleeves, according to police information. He was last seen running east on Argyle after the shooting. At least two other men were seen running northbound in the east alley along the train tracks following the shooting.

A powerful surge in gun violence has ripped Uptown since two people were shot in front of a Chinese restaurant in the 1000 block of West Argyle on March 19th.

On Saturday evening, a passenger suffered injuries from graze wounds or debris in the 900 block of West Wilson around 6:30 p.m.

Police found shell casings and a parked car with bullet holes in front of Uplift High School. Another vehicle with bullet holes drove up to an officer at a nearby fast-food restaurant where an ambulance was summoned for the passenger. Police said the victim may have been grazed or injured by material from the car door.

On Thursday, a 20-year-old man narrowly escaped being shot as a gunman chased him for several blocks while firing shots during the morning rush hour. No one was injured.

The target and his girlfriend were walking near the intersection of Lawrence and Kenmore when they crossed paths with the gunman just after 8 a.m.  The offender began shooting and chased the victim northbound on Kenmore.

“Don’t run,” the gunman reportedly yelled as he squeezed off four more shots on Kenmore Avenue. More rounds were fired as the men ran through a yard, down an alley, and back across Lawrence Avenue.

A window was shot out at the Lawrence House Flats apartment building, police said.

Cops found shell casings in several locations, and a gun was found near St. Thomas of Canterbury Church, 4800 block of North Kenmore.

Patrol officers called out for nearby schools to be placed on lockdown until the situation could be resolved. A police spokesman was unable to confirm if any schools carried out lockdown procedures.

Witnesses said the gunman was a black man who wore a gray sweatshirt with a red hood with red gym shoes. He may have shed a camouflage coat as he chased the victim, according to reports.

A 30-year-old Calumet Park woman was reported in good condition after being shot by a known offender in 5000 block of North Winthrop on April 28th.

More gunfire rang out on Easter Sunday when at least nine shots were fired just before 5 p.m. near Racine and Sunnyside. No one was injured, but the relentless paces of the shooting attempts made it clear that a rival gang is not giving up on their efforts to draw blood.

The weeks-long increase in shooting incidents apparently spread into Lakeview on April 18th. That’s when residents and motorists reported hearing and seeing shots fired between two vehicles in the 4100 and 4200 blocks of North Ashland around 6:30 p.m. Responding officers found shell casings spread across the two city blocks.
About 15 minutes later, witnesses reported seeing three young men park a bullet-ridden car in the 4100 block of North Hermitage and then walk away from the scene. Police caught up with two men who they believe were in the car. One of them is an 18-year-old gangbanger from the Uptown neighborhood. No weapons were recovered from the men, who were later released.

On April 16th, two persons were detained, and two guns were recovered after shots rang out in the 4400 block of North Racine around 5:45 p.m. Officers found several parked cars with bullet holes and shattered windows nearby.

A search of an apartment building stairwell resulted in two arrests and the recovery of a firearm in the 4400 block of North Racine. Another handgun was found about an hour later on the same block.

Shortly after 5 p.m. on April 6th, witnesses reported hearing ten to fifteen shots fired near a discount store’s parking lot in the 900 block of West Agatite. A lone gunman opened fire on a black Infinity or BMW that crashed into three parked cars before speeding from the scene, bystanders said. Shell casings were recovered from the parking lot at Dollar Tree, 4443 North Sheridan Road.