More information and video have emerged about some of the estimated 23 arrests that were made in connection with the 2019 Chicago Pride Parade.

At least one person was arrested for battering a victim aboard a southbound Red Line Train as it approached the Fullerton station shortly before 5:30 p.m. on Sunday. Information about charges were not immediately available, but a video of the attack has been posted to social media:

Earlier, a group of men beat and kicked another man in the 3100 block of North Broadway as the parade moved down the street behind them. Chicago police confirmed that an arrest was made for battery in the 3100 block of North Broadway at 1:50 p.m., but it was not clear if the arrest was in connection with the incident captured on this social media video:

Three of the men seen battering the man in the video are also seen in this photograph from Facebook: 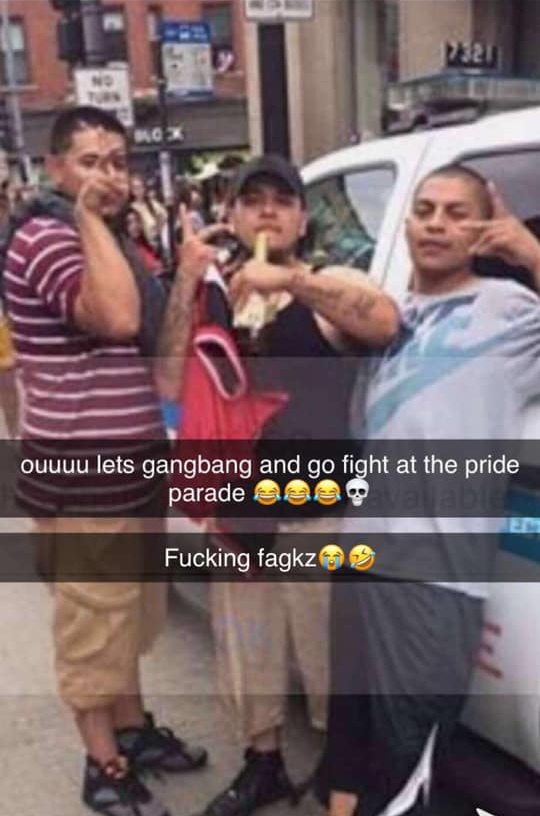 The trio is seen throwing up gang signs while standing next to a police car in the 3100 block of North Clark Street.

Police this afternoon said two people were arrested in separate incidents for slapping police horses after the parade concluded. Both arrests were made near the intersection of Belmont and Clark:

• Around 4:40 p.m., 26-year-old Alysia Sanders was arrested in the 800 block of West Belmont after she slapped a police horse on its rear end, according to police.

• Police said Wagdi Elgosbi, 28, approached a police horse in the 3200 bock of North Clark around 5:20 p.m. and asked the officer riding it if he could pet the animal. When the officer denied his request, Elgosbi slapped the horse in its face, police said in an arrest report.

Elgosbi and Sanders are each charged with one count of teasing a police animal, a CPD spokesperson said. They were released on recognizance bonds.

Also today, Chicago Comics, 3244 North Clark, posted a story to Facebook about an incident that we mentioned in our initial Pride Parade report on Monday morning:

Total random weirdness. Soon after the Pride parade was cancelled a young woman and three of her friends ran into the store frantically asking the staff to call the police, as we were trying to wrap our heads around the situation she ran to the back of the store.

As we were trying to assist her, a group of about 20+ teenagers flooded into the shop, destroying some of the displays at the front of the store.

They were searching for the young woman, at that point [and employee] ran to the back to prevent them from reaching the young woman, unfortunately he was overwhelmed and they managed to get past him.

They began spraying her with pepper spray and grabbing various random books from the small press section and throwing them at her, hitting her and her friends who were trying to shield her from the books and pepper spray.

Once we got the aggravated group out of the shop we locked the door and waited for the ambulance and police officers to arrive. The group ran away from the shop once they heard sirens.

The young woman waited for the ambulance to escort her away from the chaos in Lakeview. Unfortunately, we did not get her name but we hope she got the medical assistance she needed, we wish her a speedy recovery.

Sadly, the group destroyed a lot of product, including a lot of consignment items, we will be reaching out to those of you with damaged products soon.

To the customers who were in the shop during this incident, you are amazing, we have the best customers! This was a completely random incident that could have ended a lot worse if it wasn’t for our staff… working that day. A final shoutout to the Bonus Round Game Cafe crew who stopped by to help with the aftermath, you are the best neighbors!

Finally, in a more lighthearted vein, 2019’s Chicago Pride Parade may go down as the “Year of the Twerk.” No matter where you went, booties were shaking and buns were being grabbed. Anything stationary (and a few moving objects) within a half-mile of the parade route stood an excellent chance of being “twerked.”  The CWBChicago team has quickly compiled this modest collection of twerking videos from social media (mildly NSFW).