1:57AM: 911 callers reported a battery in progress at 850 W. Belmont, near the “Punkin’ Donuts” parking lot. A shirtless male carrying a white tank top and wearing black shorts walked up to a woman, smacked her in the mouth, and continued westbound on Belmont. He was arrested by undercover officers at 962 W. Belmont and charged with battery. Case #HW319360

The Chicago Fire Department handled two suspicious trash fires within two blocks of each other this morning. The first, at 3529 N Wilton, was extinguished at 2:40 AM. Fifteen minutes later, the second fire was reported at 846 W Newport. It does not appear that police reports were taken. The locations of the two fires are plotted below. 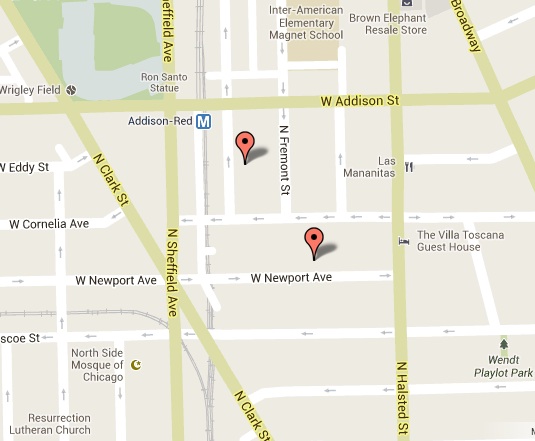