The wild rumors sweeping Clark Street are true. We’ve set up a Twitter account. @CWBChicago
We’ll use Twitter to issue breaking alerts as well as links to our top story of the day. 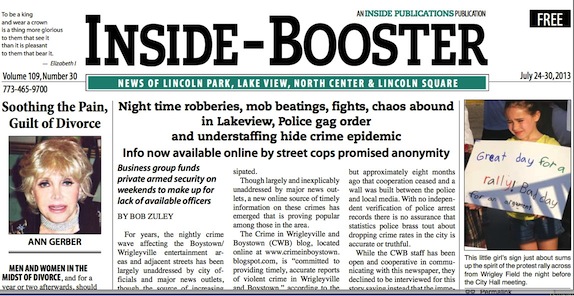 The Inside-Booster, News-Star, and Skyline community papers have been reporting neighborhood news on the North Side for over 100 years. Their weekly editions are available all over town, although we always seem to have the best luck finding a copy at Reckless Records on Broadway.

The papers have been doing a great job of covering hyperlocal news since long before the word hyperlocal existed. Reporter Bob Zuley is continuing that legacy today.

His story this week rips the the lid off of the Chicago Police Department’s decision to stop working with local reporters who want to keep their audiences informed about what is happening in the neighborhoods. We’re flattered to be featured prominently in the story as a way citizens can get the news that police executives and politicians don’t want them to have.

The Chicago Police Dept. [CPD] used to make arrest records available to the community press, but approximately eight months ago that cooperation ceased and a wall was built between the police and local media. With no independent verification of police arrest records there is no assurance that statistics police brass tout about dropping crime rates in the city is accurate or truthful.

You got that right. CWB is very fortunate to have a reader who’s willing to do the leg work to get some reports for us. But we’re just five measly characters with a blog. Bona fide reporters shouldn’t have to jump through hoops and over horses to find out what our police department is up to.

Zuley is not the only one to report that the information flow has been dammed up by the police department. A reporter for an online hyperlocal news site told us a few weeks ago that they walked into a district station to review police activity records as they had been doing regularly for months. On that particular day, the desk officer told the reporter that they could not inspect the records any more. And that was the end of that.

***
The first round of August CAPS meetings will be held next week, probably on Wednesday. We’ve emailed the 19th district CAPS office to confirm the dates as there is some conflicting information floating around. We’ll post the details as soon as we get them.
***

DNAInfo tells the story of Borderline Music owner Scott Jannush’s decision to pack up and leave Boystown after 13 years.

[…] in the last few years, Broadway north of Belmont Avenue has lost favor, [Jannush] said. He pointed to an empty storefront across the street at Broadway and Buckingham Place and the readily available street parking.

Broadway has become “an extension of Wrigleyville,” he said.

“This past year, it was a huge, drastic change,” Jannush said. “This is no longer a destination neighborhood. The boys don’t come here anymore.”

Amen, brother. Good luck to you, Scott. We’ve enjoyed having you in the neighborhood.