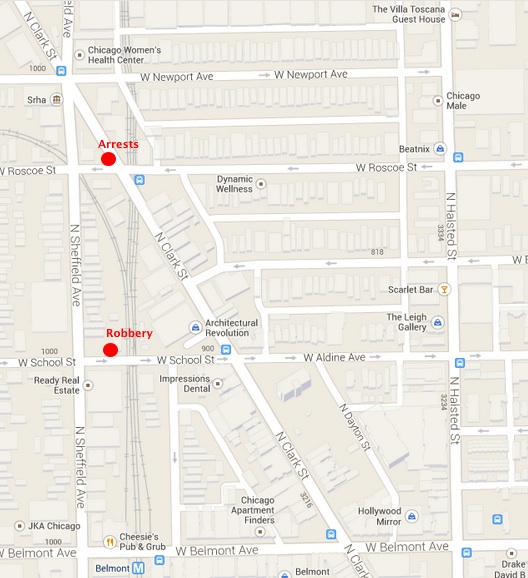 Police responded to a witness’ 911 call of a man being beaten near the L tracks on School Street between Clark and Sheffield at 4:15 this morning.

Once on-scene, officers learned that the victim had been robbed at knifepoint of his phone, wallet, and keys. The offenders, a male, Hispanic with a mustache and a long pony tail who was wearing a white t-shirt and a female fled north on Sheffield, then east on Roscoe Street.

Additional officers stopped the robbery offenders on the west side of Clark Street at Roscoe Street within two minutes of the 911 call.

In all, two men and one woman were taken into custody at 5:11AM.

Extra officers responded to the robbery because the primary offender’s description was very similar to the description witnesses gave of the gunman in an overnight shooting near Belmont and Western in Lakeview. The offender in the shooting was described as a male, Hispanic in his mid-teens with a long pony tail who wore a white t-shirt. He fled the scene with two females, possibly on bicycles.

The victim of the shooting was shot in the arm and the bullet either grazed or lodged shallowly in his chest. He is in stable condition at Illinois Masonic Medical Center. Police interviewed a witness to the shooting overnight at Area North headquarters.