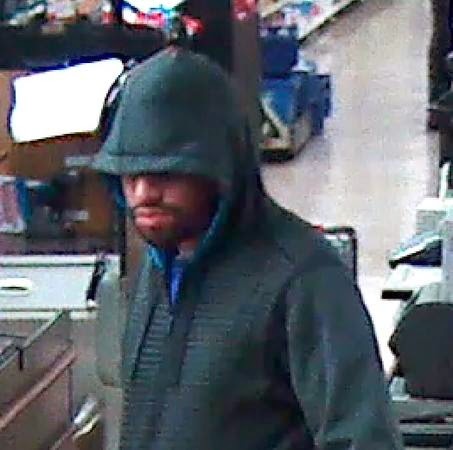 That poor little TCF Bank inside of the Boystown Jewel-Osco, 3531 N. Broadway, was robbed again this morning.

The bank, which was robbed last May and again last November by a female serial bank robber, fell victim to a different offender today.

A bank teller called 911 at 9:50 this morning to report the robbery by a male offender who implied that he had a weapon. The alleged offender is shown here in this image provided by the FBI.

Initial indications are that the robber fled northbound on Broadway after receiving $320 to $340 in twenty dollar bills.

The teller described the offender as a light-complected Hispanic man wearing a gray hoodie with a blue t-shirt underneath. He said the offender was probably in his early 30’s and an officer who saw surveillance images estimated the robber to be about 6’1″ tall, 155 to 160 pounds, with a “mustache/goatee/beard combo.”

CPD has documented the incident in record #HX186902.

In Nearby Lincoln Park…

A woman was robbed at gunpoint by two offenders near Sheffield and Lincoln around 5:45 this morning.

Described as two masked black men, one wearing a red hat and the other wearing a black hat, the offenders were last seen running into a nearby alley.

Recorded as an armed robbery with a handgun in CPD case HX186763.

———————
CWB is now on Facebook. Come “Like” us.
About CWBChicago 4360 Articles
CWBChicago was created in 2013 by five residents of Wrigleyville and Boystown who had grown disheartened with inaccurate information that was being provided at local Community Policing (CAPS) meetings. Our coverage area has expanded since then to cover Lincoln Park, River North, The Loop, Uptown, and other North Side Areas. But our mission remains unchanged: To provide original public safety reporting with better context and greater detail than mainstream media outlets.
Website Facebook Twitter YouTube