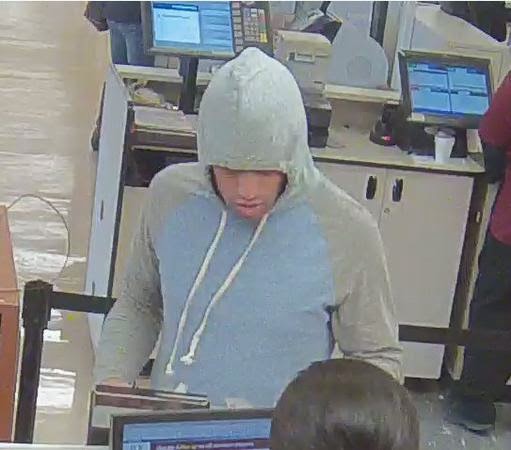 He did it again. Again.

On Friday, he robbed the TCF bank inside of the Jewel-Osco at 4355 N. Sheridan on Friday.

After passing a note to the teller at 9:43 this morning, the robber fled with about $1,200 in cash. He was last seen heading south toward Ashland.

No weapon was displayed. No dye pack was given.

A witness from this morning’s robbery says the offender may have a blackened left eye.

The FBI, which has positively connected today’s incident with the two earlier cases, describes the offender as male, Hispanic, 5’9″ to 6′ tall, slim build, late 20’s to early 30’s. He sported facial hair in his first hold-up, but has since shaved that off.

This surveillance photo is from today’s hold-up. Images from the Boystown robbery are posted HERE.

Image: Federal Bureau of Investigation
—————
Keep up with CWB on Facebook and Twitter.
About CWBChicago 4363 Articles
CWBChicago was created in 2013 by five residents of Wrigleyville and Boystown who had grown disheartened with inaccurate information that was being provided at local Community Policing (CAPS) meetings. Our coverage area has expanded since then to cover Lincoln Park, River North, The Loop, Uptown, and other North Side Areas. But our mission remains unchanged: To provide original public safety reporting with better context and greater detail than mainstream media outlets.
Website Facebook Twitter YouTube