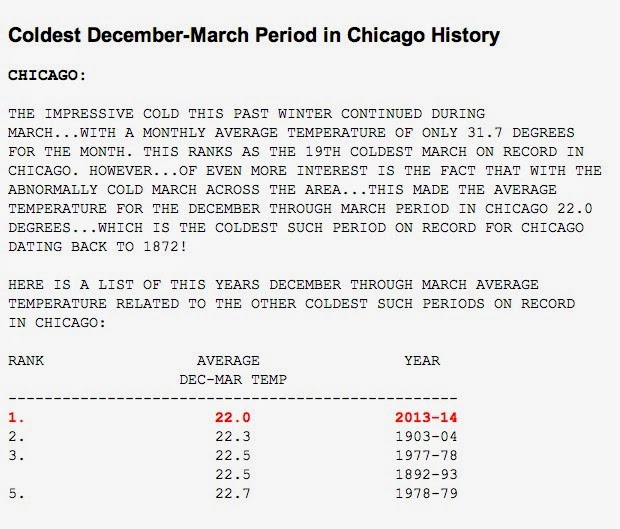 A lesser man’s back would be thrown out by the twisting, turning, and spinning that Chicago authorities go through in an effort to hide crime increases.

A number of local “news” outlets were quick to fire off re-writes of the Chicago Police Department’s first-of-the-month “Crime Is Down” press release yesterday.

But, we haven’t seen much of anything about another statement that was released yesterday: A National Weather Service statement announcing that the just-concluded trimester was the coldest in Chicago history. We’ll just post this now for future reference.

PS—The CPD press release also failed to mention that, in addition to exceeding 2013, last month’s murder count was higher than March 2011 and March 2009. (Thankfully, we have the steady hand of HeyJackass.com to keep us on the righteous path.)

As we head out of the Coldest Trimester In Chicago History, we will almost certainly see stats being manhandled on the neighborhood level by politicians and police executives. Of course, we’ll be here to call them out. Again.

REAL HUMDINGERS: The Biggest Fibs Of 2013