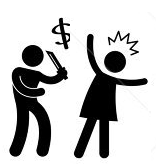 A victim was robbed at knifepoint at 909 W. Belmont, the address of Ann Sather Restaurant, overnight. Officers on patrol were flagged down near Clark and Belmont shortly after the hold-up at 2:20 this morning. CPD case HX232452

As we reported on Sunday, the 900 block of Belmont was the most robbery-plagued block in the Wrigleyville and Boystown area last year, with 27 hold-ups reported. This morning’s incident was the first on that block in 2014.

Things are hopping at The Crib youth shelter lately. Police were called to the shelter’s location twice Sunday evening.

At 8:30PM, a 911 caller reported a large group of males and females associated with The Crib were fighting in the middle of the street at Addison and Reta. Officers resolved the situation and no report was taken because the participants “became friends again.”

About a half-hour later, police were again called to The Crib after a man who is barred from the shelter kept pounding on the door in an effort to get in. Officers moved the man along.

We contacted The Night Ministry, which operates The Crib, to see if they could shed light on the incidents and to ask if The Crib has adopted a more proactive approach to police matters. A representative replied that “we don’t comment on individual police calls.”

Quick heads up to local businesses: At least four reports of counterfeit currency have been made over the past few days in the immediate area.