What’s the best way to get help when you get robbed at 6 o’clock in the morning? Well, if you’re the guy who got robbed at Berteau and Hermitage this morning, you just walk 100 yards up the street and talk to Mayor Rahm Emanuel’s security detail. 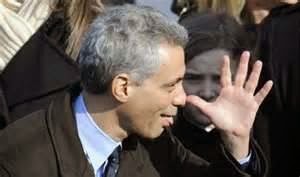 One of the police officers assigned to the 24-hour-a-day foot posts outside of Rahm’s house at 4228 N. Hermitage radioed that a man had just been robbed down the street by an offender who fled in a white panel van at 5:52 this morning.

After taking the victim’s backpack, the driver got back into his vehicle and was last seen driving northbound on Hermitage past the mayor’s house.

Police say the offender, who implied that he had a knife, was a Hispanic man with a buzzed haircut and a long red t-shirt. His white panel van had no windows in the back.

On August 22, 2013, a victim was robbed at gunpoint on the other end of the mayor’s block, directly across the street from a police pod camera. There have been no arrests.