ABC7 is pumping up an “I-Team” report for tomorrow night that will detail all of the red light camera and speed camera tickets that have been racked up by Mayor Rahm Emanuel’s police-driven SUVs. (Boy, the TV promo has some very serious music for a story about traffic violations!)

Fun little story. We decided to get a personal preview, so we dug out one of the mayoral license plate numbers and typed it into the city’s ticket database.

It turns out that the city issued a warning last May that “any vehicle registered [to the police department] may already be eligible for seizure” due to unpaid fines generated by just one of the two mayoral SUVs. 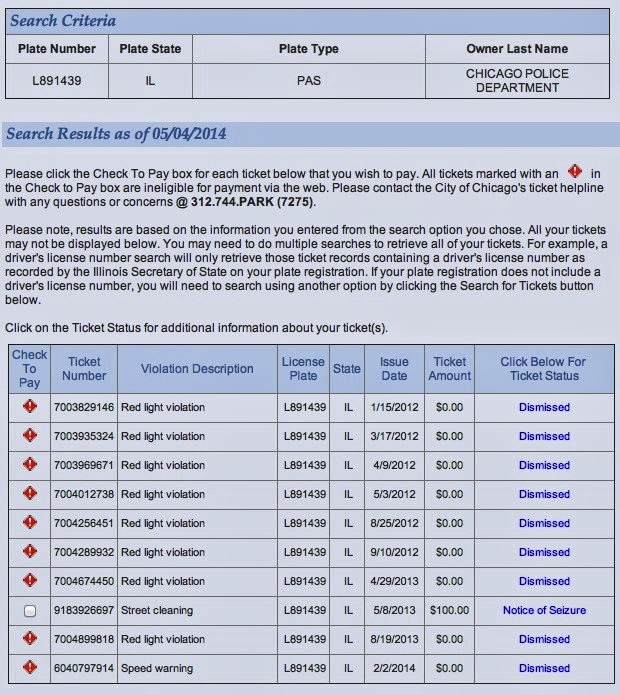 What a hoot. At any rate, if you want to watch videos of the mayor’s mini-motorcade blowing through red lights, go to the city’s red light camera site—Quicktime required—and type in any of these ticket numbers:

For license plate, enter L891439. We don’t have the plate on the other SUV. Gonna have to tune in to Channel 7 for that. One of CWB’s intrepid readers has shared the other SUV’s license plate and a list of its ticket violations. That info is in the comments section of this post.

OFFICER: Can we get an ambulance for this guy over here? I think he thinks he’s a tree.
OFFICER2: What kind of tree?
OFFICER: A drunk tree.
OFFICER2: Does the tree have nuts?
OFFICER3: Why don’t you ask him to leave?

Understatement of The Week

7:30AM Tuesday – Officers are asked to accompany an ambulance crew inside a popular Halsted Street bathhouse where a customer was said to have suffered a seizure.

OFFICER: Uh. I need another car. We’re all the way in the back. Hey. They don’t really let the police in here, so be sure he asks the staff to let them in.

—–
Email us.  Facebook us. Twitter us.
About CWBChicago 4360 Articles
CWBChicago was created in 2013 by five residents of Wrigleyville and Boystown who had grown disheartened with inaccurate information that was being provided at local Community Policing (CAPS) meetings. Our coverage area has expanded since then to cover Lincoln Park, River North, The Loop, Uptown, and other North Side Areas. But our mission remains unchanged: To provide original public safety reporting with better context and greater detail than mainstream media outlets.
Website Facebook Twitter YouTube