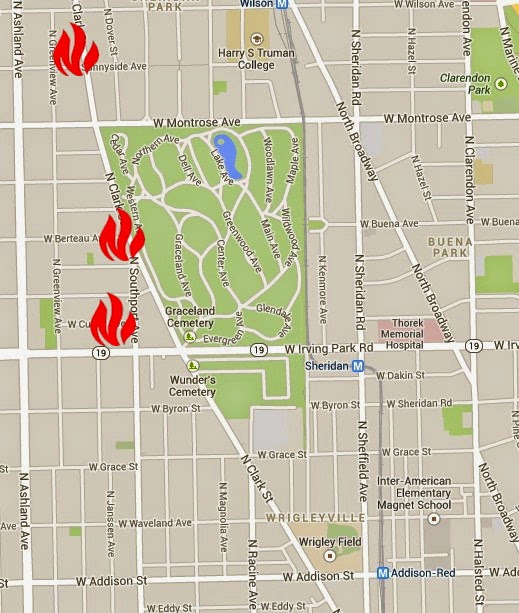 Three fires broke out within 20 minutes overnight in alleys to our north. All three fires were bonafide, but only one caused damage to structure. The police department’s bomb and arson unit is investigating at least one of the incidents.

At 4:27AM, a dumpster fire was reported and confirmed by police at Clark and Southport.

Ten minutes later, a couch was found on fire in the alley at 4500 Clark.

And seven minutes after that, another dumpster was found ablaze in the 4000 block of Southport. In this case, the fire caused some damage to a nearby porch.

The Southport incident has been initially classified as “non-criminal damage to property by fire” in CPD case HX272864.

CWB has received confirmation of a robbery that took place around 12:45 last Friday morning on the northeast corner of Addison and Broadway.

At the time, a witness called 911 to report that a man had been robbed of his cell phone in the area, but that the victim had left the scene. We did not report the incident because it could not be confirmed.

New information now shows that the victim did eventually file a report in the matter, which is classified as a strong arm robbery in case HX264030.

Through May 16, robberies in Wrigleyville and Boystown are exactly on-pace for the month when compared to May 2013. Robberies are down year-to-date, due in large part to a sharp drop during the extremely cold January – February period.