Two thieves hit the jackpot, getting away with $3,500 cash from an art gallery near Clark and Oakdale this evening. 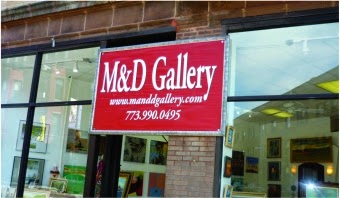 Police were called to the M & D Gallery, 2933 N. Clark, after two offenders entered the store, took the employee’s wallet from her purse, and then fled around 5:30PM.

The man who took the wallet is described as black 6’1″ tall, with short hair. He wore a gray sweatsuit. He was in the company of a black female who wore a black baseball-type hat with gold metal decorations and dark pants.  They were last seen heading south on Clark Street toward Diversey.

A woman was awakened around 5:30 Sunday morning by an unknown male who made it inside her apartment near Waveland and Wilton in Wrigleyville. Another person managed to follow the intruder to the Addison Red Line station, where police took the 30-year-old into custody.

Other recent burglaries in the immediate area:

—–
Email us.  Facebook us. Twitter us.
About CWBChicago 4363 Articles
CWBChicago was created in 2013 by five residents of Wrigleyville and Boystown who had grown disheartened with inaccurate information that was being provided at local Community Policing (CAPS) meetings. Our coverage area has expanded since then to cover Lincoln Park, River North, The Loop, Uptown, and other North Side Areas. But our mission remains unchanged: To provide original public safety reporting with better context and greater detail than mainstream media outlets.
Website Facebook Twitter YouTube