A Lake View man is telling yet another package theft story on Everyblock and CWB readers will not be surprised to learn that he is having a helluva time getting the Chicago Police Department to take a report.

“Mikey” posted these photos of the alleged thief as she climbs the stairs of his home in the 3700 block of Hermitage. Seemingly without a care in the world, she is even lugging a box that she stole from Mikey’s neighbor. 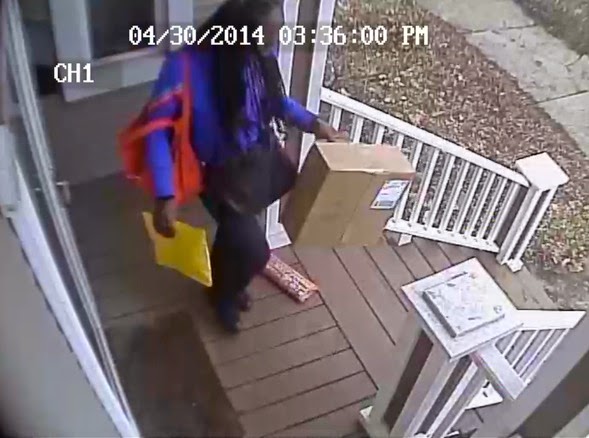 And when Mikey tried to file a police report, he ran into the tedious, mind-numbing machine that grinds down Chicago’s crime stats by double digits.

Just today I called seven times, and all seven times I was redirected to another extension that did not seem to want to help. I eventually called the CPD’s Postal Division, which subsequently put me on hold all 3 times I called them, and kept me on hold for a total of 57 minutes.

I work all day, so I did not have much time outside of my lunch break to sit on hold with no avail…Anyone have any ideas on how I can actually get someone from CPD or USPS to care?

Last month, CWB told the story of a woman who confronted a stranger who had possession of her cell phone. He refused to give it back and fled. After the woman successfully navigated the police department’s telephone reporting system—and being hung up on repeatedly—she was told that the department would not take a crime report for her case. They did, however, log it as a non-criminal “lost and found” matter.