At least five people have been robbed in Boystown and nearby Lakeview since 8:30 last night, including one woman who was carjacked. Only one offender is believed to be in custody.

Belmont Avenue logged its 14th confirmed robbery since June 8th as that street continues to spiral wildly after dark. As of 5:30 Saturday morning: 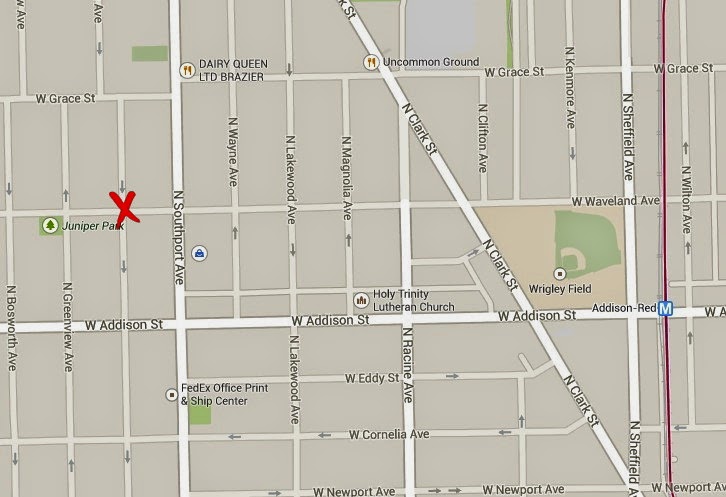 A carjacker forced his way into a woman’s car as she idled at a stop sign less than a half-mile west of Wrigley Field last night. He then removed the woman from the car, threw her to the pavement, and drove away southbound in her 2011 Subaru wagon with Connecticut plates.

The carjacking took place on the normally quiet corner of Waveland and Janssen at 8:55PM.

A CWB reader who saw the victim moments after the carjacking said she was “obviously very shaken.”

No weapon was displayed by the offender, who is described as a black man with short braids in his hair. He wore a gray t-shirt and tan shorts. Case number is HX331418.

A passing unmarked police unit caught one offender, but four others escaped after robbery-laden Belmont Avenue claimed its 13th victim in under a month Friday.

The victim was on the north side of the street near the shuttered Taboo Tabou boutique when a pack of five robbers attacked at 8:37PM.

Officers scoured the area for the other suspects without success. Still at large is one black female who wore a beige halter dress and three black males, all 5’8″ to 5’10” tall and 160 to 180 pounds. They were last seen running toward the Belmont CTA station. CPD case number is TBD.

Raw data released early this morning on the Chicago Police Department’s CLEARMap site confirms a 14th robbery along the “Helmont” corridor. According to the department, a victim was robbed in an alley near Belmont and Sheffield around 4 o’clock last Saturday morning. CPD case HX322973.

Beaten and Pepper-Sprayed in Boystown

A man was beaten, robbed, and pepper-sprayed by three attackers near Halsted and Aldine on the Boystown strip around 3:30 this morning.

The victim reported that three offenders jumped him, sprayed him, stole his white iPhone 5s, and fled east, then south on Broadway toward Belmont. Offender descriptions:

A Lakeview woman reported being tackled from behind and robbed near Diversey and Sheffield around 3:40AM.

The offender took the victim’s brown Swiss Army bag—which contained her passport, Alabama ID card, and a brand new iPhone 5—and then jumped in a white sedan and drove west on Diversey.

She described her attacker as male, black, 5’11” tall, wearing blue jeans and a white t-shirt.

Officers gave the woman a ride to her home. CPD case number is HX331853.

At 3:47 this morning, a man called 911 to report that he had taken shelter in a taxi cab after being robbed near Belmont and Sheffield.

Several minutes later, a robbery victim—believed to be the same man—flagged down a passing sergeant at Belmont and Sheffield to report being robbed of his wallet and cell phone. The sergeant broadcast details of the alleged incident and asked to have a unit assigned to do the paperwork.

The police department’s “entertainment detail” unit that was assigned to handle the matter claimed that it never saw a robbery victim and said he must have left. It appears that no report was taken.

UPDATE JULY 27: It appears the victim eventually filed a report over the phone. Case HX349134.