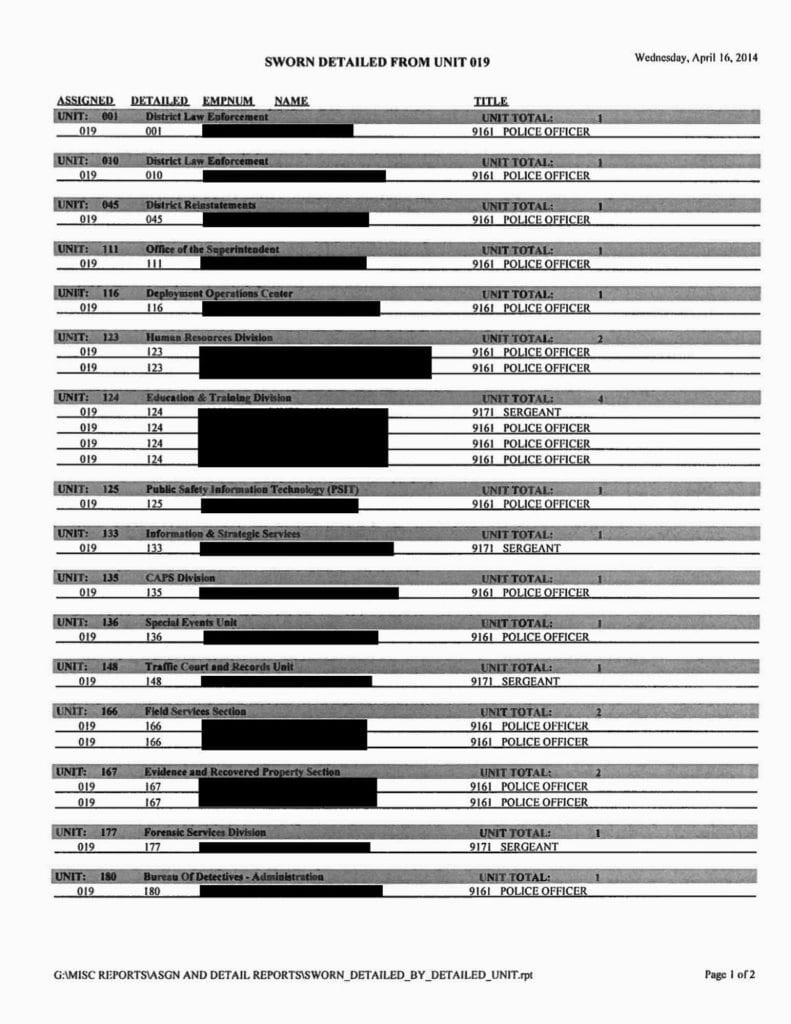 There’s a bar graph at the top of every page on CWB. It shows the dramatic and, frankly, dangerous decline in the number of police officers assigned to our district. As of mid-May, 118 fewer cops were officially assigned here than in October 2011.

But the bar graph does not tell the whole story.

The practice of assigning officers to a district and having them work elsewhere is known as “detailing.”

In mid-April, 16% of our district’s combined force of sergeants and officers was “detailed out” to other places in the department.

Where are our cops actually working? Just about everywhere.

• 10 cops and 2 sergeants do their day-to-day work in the Area 3 Deputy Chief’s office.

• 1 cop and 2 sergeants work in the Area 1 Deputy Chief’s office.

• 8 cops and 1 sergeant sit downtown and take police reports over the phone.

• 3 cops and 1 sergeant actually work in the Education and Training Division.

• Human resources, Field Services, and Evidence and Recovered Property units each take two of our cops.

When it’s all said and done, the 19th district did not have 351 sworn officers working here in mid-April. It had 297.

Also of note is this: 24-hours a day, 7 days per week, at least two 19th district police units are assigned to park outside of Mayor Rahm Emanuel’s home at 4228 N. Hermitage.

That means that, while not “detailed out” of the district, a minimum of 12 officers and sergeants per day are tied up watching the mayor’s real estate, whether he’s home or not. Factoring in days off, that means at least 18 of the district’s patrolmen and sergeants—a full 5% of its manpower—are dedicated to protecting the mayor’s personal property.

CWB previously reported that 3% of the district’s manpower is regularly dedicated to protecting the mayoral “compound.” We were corrected.