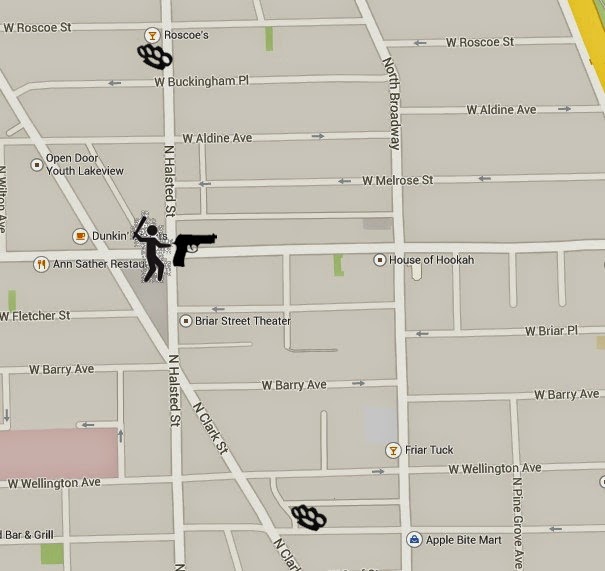 At least three people were beaten or threatened in Boystown by a carload of offenders in separate incidents overnight. No one is in custody and it appears that no official police reports were filed. The motive of the offenders is not clear.

Around 4:15AM, a man ran into the Walgreens at Clark and Barry after “five gang members” pulled up in a car at Halsted and Belmont, then jumped out and came after the victim. The five got back into their car when the man ran away. He described the offenders only as black men in a black car, possibly a Honda.

At 4:24AM, officers who were searching for the vehicle got flagged down outside of D.S. Tequila Company, 3352 Halsted, by a young male victim who reported that five individuals jumped out of a car and beat him up. The vehicle was described as a black or grayish Mercedes with four to five black male occupants who were “looking to beat up people.”

Less than a minute later, 911 received a call from a pedestrian who said a black Hyundai with five occupants just pulled up next to him at Belmont and Halsted. One of the occupants then flashed a gun at the caller. The car was last seen heading eastbound on Belmont toward Lake Shore Drive.

Possibly related to these three incidents is a 3:45AM 911 call that reported three men beating a victim in the 600 block of Oakdale. Officers could not locate a victim when they arrived on-scene.

New information released by the Chicago Police Department this morning shows that yet another person has fallen victim to the robbery syndicate that operates on Belmont Avenue between Halsted and Seminary.

Raw data from the city shows that a person was robbed at knifepoint at 3AM last Saturday morning under the Belmont Red Line station L tracks. No arrest was made. CPD case HX418582.