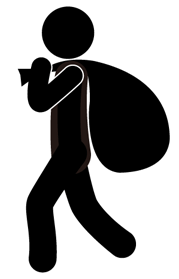 A man who left his back door open overnight awakened Monday morning to find that someone had locked his dog in a room and then stolen his stuff. The incident, recorded as an unlawful entry burglary, took place near Sheffield and George.

Three blocks away, a resident discovered that a burglar had forced their way into their home in the 3100 block of Seminary. The break-in was reported at 7:30PM Monday.

Other known burglaries reported over the past week: