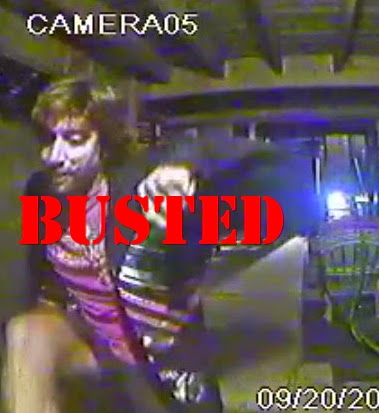 A 26-year-old Elgin man is in custody today, accused of being the guy who defecated in a bucket and then tried to kick in the back door of a Lake View home as a surveillance camera rolled early Saturday morning.

CWB posted the video after receiving it from the homeowner who was dissatisfied with the way Chicago police handled the matter initially.

Andrew Lopez of the 12400 block of N. Jackson Drive was taken into custody at the Elgin police station Thursday night. He stands accused of the incident seen on the homeowner’s video, as well as damage to a neighboring homeowner’s property, and a successful Lake View burglary that took place in July. Bail is set at $75,000.

No police report was taken at the time of Saturday’s attempted break in nor was a report taken later in the day when a neighbor reported that her garage had been broken into.

CWB posted the homeowner’s video at 2:24 Sunday morning and detectives came knocking on the victims’ doors midday on Monday. According to the homeowner who contacted CWB, a 19th district officer told detectives that he recognized the man in the video as a subject he took into custody for drug possession in the 900 block of Belmont shortly after the attempted break-in was recorded.

In addition to attempted burglary charges for the videotaped incident, Lopez is charged with criminal damage to property for allegedly tearing up a nearby resident’s back yard. According to court filings, that incident was caught on video as well.

Lopez is also now charged with a second burglary after that victim identified him in a photo line-up as the man who took a Sony camera, iPhone, laptop, wallet, and backpack from a home in the 2900 block of Lakewood on July 12.

The homeowner who originally contacted CWB with the break-in video is pleased:

After a few days of hard police work I am happy to say that the offender in my Attempt Residential Burglary is in custody and charged.

I apologize if my posting of the video offended hard working officers in the 19th district, but it did happen to help another victim.

[The Lakewood] victim saw my video online and was able to identify him as his burglar.

I also appreciate the CWB for the quick response to my e-mail and help in bringing attention to my crime.  Lets now see if our court system does its job.

CWB is always open to assisting in bona fide cases such as this. We also strongly encourage victims who are dissatisfied with police response to call 911 and ask for a supervisor. Our district is particularly fortunate to have a commander who actively seeks direct contact from citizens who have any concerns whatsoever. He may be reached at elias.voulgaris@chicagopolice.org