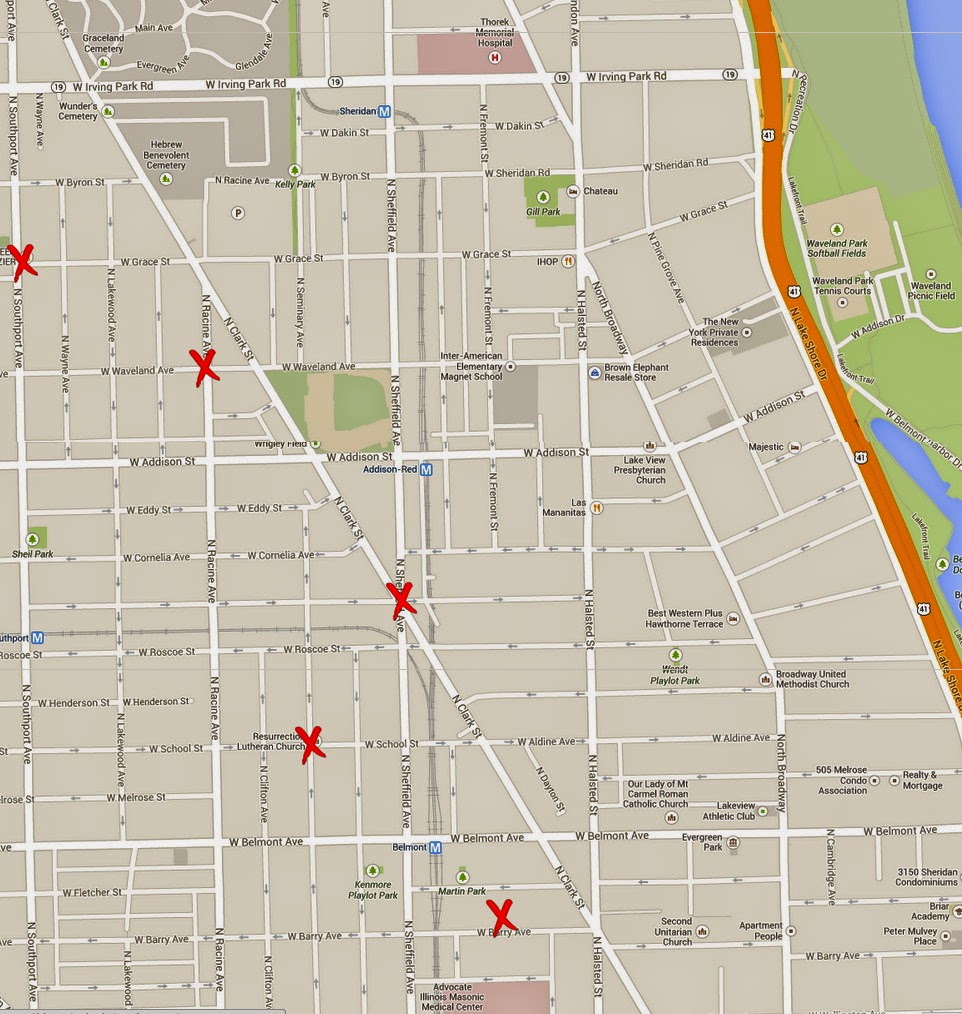 Four robberies were reported to police between 8 o’clock last night and 5 o’clock this morning. All of the reported incidents occurred along or slightly west of Clark Street. None of the offenders is in custody.

Police are known to have made contact with three victims:

• Two men placed an object to a woman’s head in the 900 block of Barry around 8:15 Friday evening and took her black Swift backpack and blue/black leather Lululemon bag. The victim did not see her offenders. She believes the object placed to her head was a gun, but she did not see that either. Recorded as an aggravated robbery in case HX444687.

• At 12:30 this morning, a witness reported two men beating up a victim near Seminary and School. A couple of minutes later, the victim called 911. Those two men were robbing him. The offenders took a silver phone with a black case and fled westbound on School, then south on Clifton. No description is available for the first offender, but the second robber is described as male, black, 6-feet tall and skinny, with a short afro, and wearing an orange hoodie. CPD case is HX444933.

• At 4:37 this morning, a strong arm robbery victim flagged down officers near Newport and Sheffield. The description of one offender was offered: Male, black, about 15-years-old, 6-feet tall, wearing a dark hoodie and blue jeans. CPD case is HX445103.

• A witness reported people “fighting” in the 1200 block of Waveland. Ten minutes later, a robbery victim calls 911 and reports being pepper-sprayed and robbed of their phone and wallet near Waveland and Racine. CPD case number HX445068 was eventually filed.

One robbery victim did not receive a timely police response and no report was filed:

• At 4:47AM, a man reported that three offenders “snatched” him into a vehicle, then took his wallet and phone before dumping him near Grace and Southport. The vehicle, described as a silver SUV, was last seen heading eastbound.

According to police dispatchers, the victim was “blowing up the phones” at Chicago’s 911 call center for at least 15 minutes, seeking help.

But, the 19th district was entering “Radio Assignments Pending” (RAP) status as the victim’s call for help came in and it is not known if police ever made contact. RAP status means all officers in the district are assigned to calls and no cops remain available to handle incoming emergency calls. During RAPs, calls for police service stack up and are handed out on a priority basis as officers come back into service.

The victim did file a report on the crime, which the police department has categorized as a theft, not a robbery, in case HX445118.