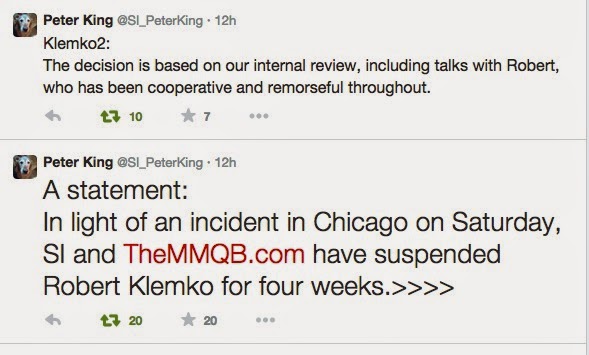 Sports Illustrated football reporter Robert Klemko has been suspended for four weeks after being accused of carjacking and battering a cab driver in Lake View early Saturday morning.

Klemko, 27, is said to have been “cooperative and remorseful throughout” SI’s internal review, according to a tweet by the magazine’s Peter King on Thursday.

“We have had increased patrols…Sometimes you don’t always see it.”

Of course,  not. And there are not increased patrols.

A few days ago, there was a shooting down the street from Smith’s house, which lies south of our police district. One neighbor,  quoted by DNAInfo Chicago said:

“Some people get very frustrated by [the police] response time. There’s a level of frustration because it really is a quiet neighborhood.”

Oh, the police are responding, ma’am. You just can’t see them.

And will Smith push for more police during the on-going city budget process?

“I’m still looking at the city budget,” Smith said. “It’s really all a matter of choices and resources.”

Yes. The choice of an elected representative to not take a stand on behalf of her constituents. That’s the choice that she will make. Just like so many other pure rubber stamp aldermen will do.

Sensible minds have to wonder, why do taxpayers pay over $105,000 a year to each of 50 aldermen when at least 40 of them vote exactly in line with the mayor’s wishes on literally every piece of legislation? And remember, the job of alderman is part time by law. And includes a pension.

• Monday, 1:43AM — Man breaks into a garage in the 3100 block of Seminary. He is described as black, wearing a black hoodie, and riding a bike.

• Wednesday, 7:22PM — Forcible entry to the first-floor apartment in the 800 block of Fletcher

• Wednesday, 9:49PM — Forcible entry to the second-floor apartment in the same building on the 800 block of Fletcher.