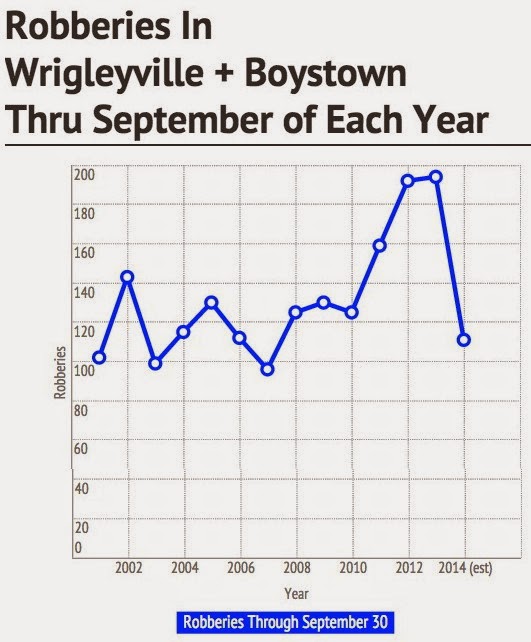 Robberies, the most obvious measure of our neighborhood’s multi-year street crime explosion, continued their steep decline in September.

CWB estimates that 11 incidents were recorded by police last month, down more than 50% from the 26 cases reported in September 2013.

Through September, there have been 111 officially-reported robberies in Wrigleyville and Boystown this year, compared to 194 at the same point last year.

CWB is aware of four instances in which seemingly bona fide robberies received police responses last month, but the incidents went unrecorded. There could be legitimate reasons for the discrepancies and we are looking into them.

Significant preventative policing measures instituted by 19th district commander Elias Voulgaris early this year have succeeded in pushing many criminals to other, less risky hunting grounds. That predictable result could be seen as Lake View experienced robbery sprees over the past two weekends—with most (but not all) of the attacks occurring outside of the Wrigleyville and Boystown area.

The shift in criminal patterns has not gone unnoticed by our neighbors to the south, west, and north. As noted in this month’s South Lake View Neighbors (SLN) newsletter,

As Commander Voulgaris increased  patrols [around Belmont and Sheffield], the criminals smartened up [and] relocated their activities farther west, more towards the SLN area. They improved their success ratio by incorporating cars into the escape plan. The main crime is the strong-armed robbery with the goal being the victim’s wallet or smart phone.

Another section of the newsletter speaks of something CWB readers and residents with functioning eyeballs have long known about:

Police have designated an area called the “Belmont Shuffle” which is the touring area of out-of-area roughnecks and gangbangers. They get off the “L” and instead of loitering they walk north on Sheffield, east on School, south on Halsted and west on Belmont. During their walk they commit petty crimes including muggings, garage break-ins, apartment burglaries, etc

While we haven’t run the numbers on robbery rates in their area, we would caution our friends in South Lake View against referring to muggings and burglaries as “petty crimes.” Unless, of course, the prospect of being charged more than $100,000 to get pieced back together after a mugging is a petty matter over there. Trust us. We know.