UPDATE: Chicago Police are saying the fire was caused by a homeless person who was trying to stay warm. Ahem.
———–
She awoke this morning to the sight of flames coming through her window and called 911. Somehow, someway, a mattress was set ablaze between her home and her neighbors. No one was injured.

The Boystown resident’s overnight horror is believed to have marked the return of Lake View’s serial arsonist, who had not been heard from in exactly one month—last striking with two fires on September 26, a block or so from this morning’s blaze.

Fire and police responded to this morning’s fire in the 900 block of Newport at 1:37AM. There, off of the alley, a mattress leaning against a yellow-sided home was set ablaze. Fueled by the flammable siding, flames raced to the top of the 4-story home.

Initial fire crews immediately labeled the incident arson, although the fire marshal pulled back from that until investigators do their thing.

As with the two September 26 fires, this morning’s blaze seems to have been intentionally set adjacent to occupied homes, a deadly escalation of the fire bug’s operation.

Whoever is starting these fires surely has no trouble finding good fire-starting materials.

Under the Red Line tracks, less than 100 yards from this morning’s fire, a mattress and box spring lie stacked up next to trash receptacles. Just begging someone with the wrong intentions to carry them down the alley a bit and strike a match. 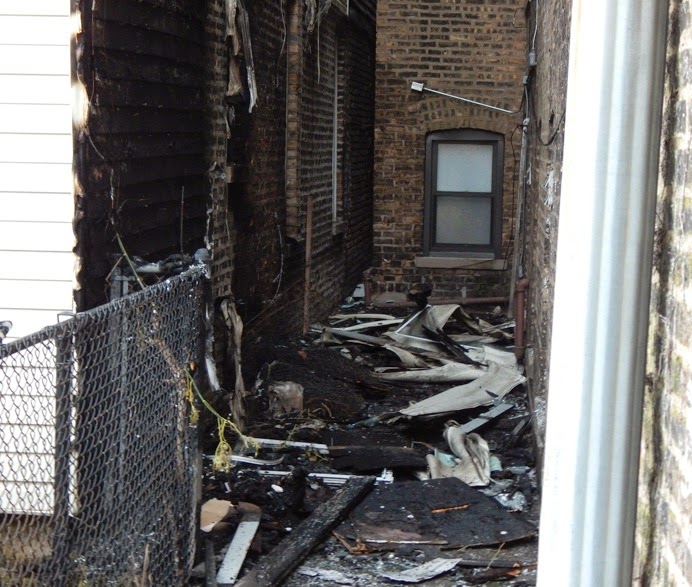 Meanwhile, bail for Daniel Grunauer, the former Wrigleyville bartender who has been called a possible “associate” of the Lake View arsonist, has seen his bail lowered from “no bail” to $75,000.
Grunauer is charged with burglary after allegedly breaking into an Uptown apartment complex that was subsequently set on fire as well as attempted arson for allegedly lighting a dumpster ablaze in an Uptown alley.
Police say Grunauer gave “admissions” in both cases.
Grunauer previously worked at Fiesta Cantina on Clark Street, a half-block from this morning’s fire.
He has not been charged with any Lake View fires.
———-
Email us. Facebook us.
About CWBChicago 4363 Articles
CWBChicago was created in 2013 by five residents of Wrigleyville and Boystown who had grown disheartened with inaccurate information that was being provided at local Community Policing (CAPS) meetings. Our coverage area has expanded since then to cover Lincoln Park, River North, The Loop, Uptown, and other North Side Areas. But our mission remains unchanged: To provide original public safety reporting with better context and greater detail than mainstream media outlets.
Website Facebook Twitter YouTube