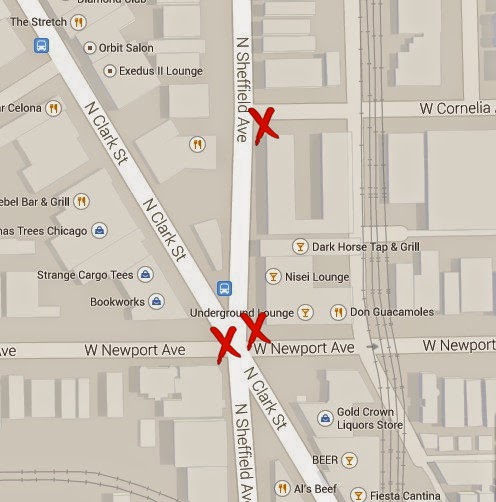 Three victims were relieved of their valuables in three separate incidents—two robberies and a phone snatching—at essentially the same Wrigleyville intersection this morning. None of the offenders is in custody.

12:47AM — Patrol car is flagged down at Newport and Sheffield after a victim has their iPhone snatched. The offender, described as a black male 25-35 years old, wearing a black North Face jacket is last seen running toward Belmont. Case HX472012.

2:18AM — Police are flagged down at Newport and Clark by a victim who has been strong-arm robbed by a “group of young black males” in their teens or early 20’s. An ambulance takes the victim to Thorek hospital. Case number is HX472076.

3:02AM — A man reports that he has been robbed near the 3400 block of Sheffield by a group of three or 4 young black men who flee eastbound on Cornelia towards Halsted. There is a significant language barrier and initial reports indicated that a gun was displayed. That has not been confirmed. Case number is HX472131.

A purse snatcher who struck at the Clark/Belmont Starbucks around 1:30 yesterday afternoon wound up looking down the wrong end of a cop’s gun moments later. An officer was tipped off to the theft and gave chase, eventually cornering the thief in the 900 block of School. An arrest was made and “a bunch of witnesses” from Starbucks gave statements. Case number HX471243.