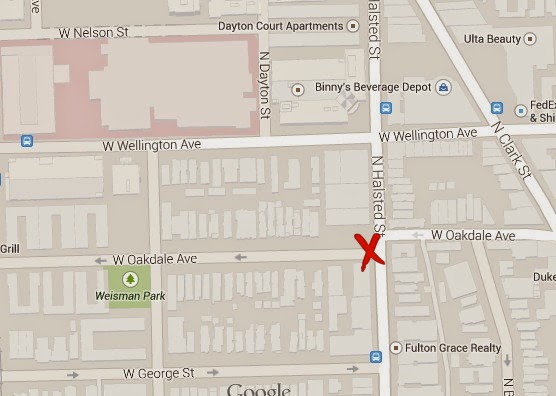 A woman was knocked to the ground in an attempted strong arm robbery at Halsted and Oakdale Monday evening. The offender and an accomplice fled the scene when the victim’s screams drew attention from passers-by.

At least three witnesses called 911 to report the 8:30PM attack.

The offenders reportedly fled the scene northbound in the in the west alley of Halsted in a black or dark colored sedan with Purdue University commemorative plates. Descriptions:

Classified as an attempted strong arm robbery, the CPD case number is HX484734.

Also Monday, we came across the first known 911 call giving the address of our new LGBT-friendly senior housing project at Halsted and Addison. A man called 911 from 3600 N. Halsted to report that a known offender had just struck him and was “probably somewhere in the area.”

The call was dispatched to police at 6:29PM, although the dispatcher admitted that the call was “really old” because it had to sit around while short-handed officers handled more pressing matters.