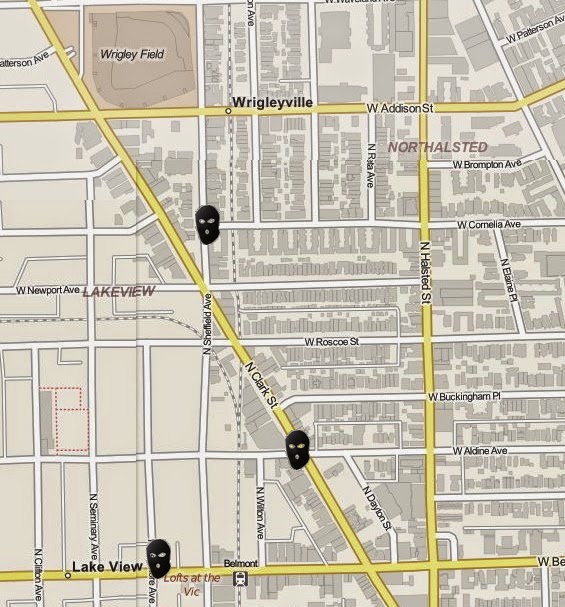 UPDATE NOVEMBER 17 8:47AM— Police have issued a community alert for robberies in the area. The alert connects the Clark/School and Cornelia/Wilton robberies with the same group of offenders.

UPDATE NOV 17 1:10AM: More robberies occurred since this report. There have now been 4 robberies in the immediate area and two more in nearby neighborhoods.

UPDATE 12:35PM—Added details of a third robbery.
——-
Officers returning to the 19th district station after driving a robbery victim home this morning got flagged down in Wrigleyville by another robbery victim who needed their help.

Several witnesses saw the first victim get pushed to the ground and robbed at Clark and School (Aldine) shortly after 2 o’clock this morning.

According to bystanders, three to four black men in their teens or early 20’s robbed the man and fled southbound on Clark in a late 90’s Mercedes. The get-away car has back end damage and a bungee cord was used to hold its trunk closed. The victim told police that the offenders approached him and offered to sell him drugs before they robbed him.

Officers drove the victim to Lincoln Park and made their way back to the 19th district station. There, a second robbery victim flagged them down before they had a chance to park.

That man told the officers that four black men in their early 20’s approached him and offered to del l him drugs near Wilton and Cornelia shortly before 3AM. The men produced a handgun and ordered the victim to cover his eyes, which prevented him from remembering more detail about their descriptions.

When the man last saw the offenders, they were running northbound on Wilton toward Addison with his property.

Yet another man was robbed, this time in a 6-on-1 attack, at Belmont and Kenmore shortly after we posted our story above.

The victim was approached by six black male offenders, two of whom had dreadlocks and one of whom had a knife, shortly after 4AM. The 911 caller told police that he could still see the offenders running eastbound to the Belmont Red Line station. No arrests. Case number TBD.

The Wrigleyville and Boystown neighborhood has seen a sharp decline in robberies this year, a refreshing change after suffering through three years of record-high muggings and beat-downs.

But, the year-over-year improvement slowed last month and this month is pacing to exceed 2013’s November total.

The CPD case numbers for today’s robberies are TBD.