Keonte Stevens is charged with battery, obstructing identification, and possession of a deadly weapon in connection with an alleged battery at the Night Ministry’s Boystown outreach last Thursday. Stevens, who identifies as a female and lists The Crib youth shelter as her home, is free on a $10,000 I-Bond.

This is the third time 18-year-old Stevens has been accused of battery on Halsted Street since August.

Charges in a different Night Ministry battery on August 14 were dropped when the alleged victim failed to show up in court. Stevens currently has another battery case pending in connection with an incident near Halsted and Addison on October 2.

A 36-year-old woman told police last week that a verbal altercation with Stevens turned physical when Stevens “knocked a cup of coffee out of her hand and proceeded to beat the victim about the face …causing her to fall to the ground,” court records say. Stevens “and other offenders [then] began to kick her about the body before fleeing.” No one else has been charged in the case.

The victim was treated at Illinois Masonic Medical Center for swelling and abrasions.

Police arrested Stevens in the 900 block of Belmont a few minutes after the alleged battery as she attempted to climb over a fence to escape pursuing officers. Police say they found  a “black-handled kitchen knife with an 8-inch blade” in Stevens’ bag during a custodial search.

According to court records, Stevens identified herself to cops as “Lamonte Z. Stephens” on three separate occasions, but eventually gave her real name after being confronted with her October 2 mugshot and booking information. Stevens is also known as Mariah Stevens. 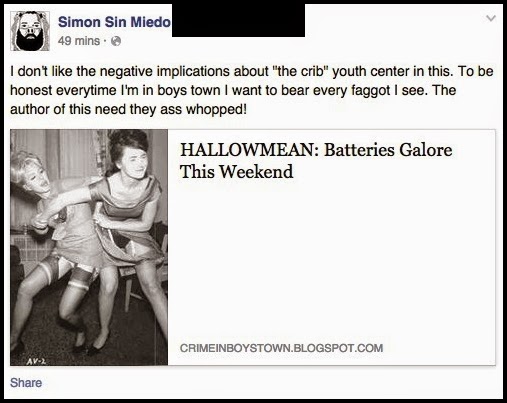 Miedo expressed his opinion in a re-share of our weekend recap, which pointed out that The Crib youth shelter summoned police to help remove a problem resident. We also pointed out that while The Crib has no trouble calling when they need help, they did not reciprocate when officers believed an offender had taken refuge in their facility.

As CWB readers know, we support The Crib’s mission in Boystown, but we find the operators to be two-faced and not particularly good neighbors.