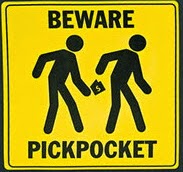 A pickpocket spree on CTA trains and near CTA stations in our neighborhood is the topic of a fresh alert from Chicago Police.

Detectives say victims traveling alone have been targeted at CTA stations or “in a CTA conveyance” passing through our area by one or two offenders who surreptitiously took valuables from the victims’ pockets.

Among the locations and times of related incidents:

The police alert states that the department has no “definitive description” of the offenders “due to the nature of these crimes.”

However, a CWB source has told us that officers arrested a man in connection with the incident aboard a CTA train at 3:30AM on November 22. They had to let the man go because the victim refused to sign a complaint.

That suspect, who is currently on parole, has a long list of imprisonments for theft, marijuana trafficking, and aggravated battery. He is a 58-year-old black man, 6′ tall, 240 pounds, with a scar on the inside of his left forearm. CWB is withholding his name and photo because he has not been charged with any of the pocket-picking incidents.