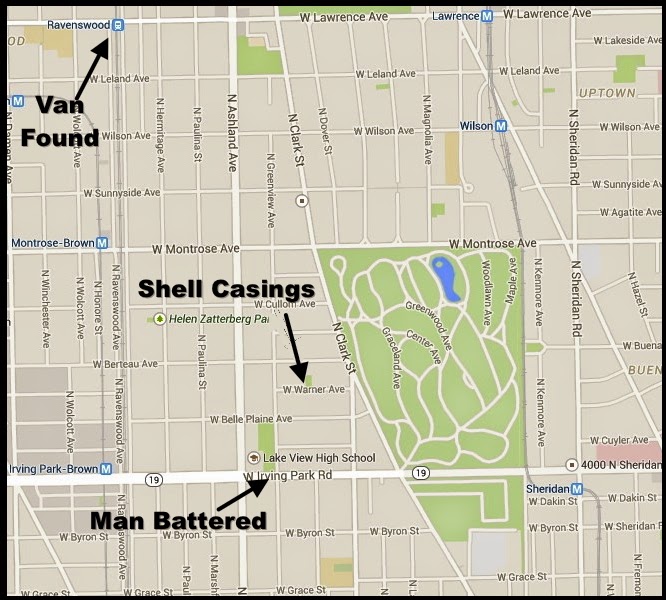 UPDATE: A full update is now up. Our original report follows.

UPDATE November 7: A further update is now posted.
————-
A series of gang-related incidents broke out in a normally quiet section of nearby Lake View Monday evening, with at least six shots fired and one man being beaten as the events unfolded between 9:40PM and 10 o’clock.

No one was struck by the gunfire. And an officer on the scene said the incidents were related—part of “ongoing gang things.”

We believe four people were taken into police custody during the incident, which appears to have involved predominantly-Hispanic gangs.

A CWB reader who estimates 10 shots were fired on her block reports  a “good response from CPD.”

Please note the preliminary nature of the following information:

Police responded to the area of Clark and Southport after a series of 911 calls reporting shots fired and a man with a gun. Officers eventually found six shell casings outside of a home in the 1400 block of Warner.

A number of individuals were detained along Warner and on side streets while others fled into nearby alleys and yards. Initial indications are that the people who were rounded up in the immediate area had been targeted by rival gang members.

Witnesses reported seeing a silver or gray Altima with tinted windows flee the scene westbound. It is not clear if it was involved in the shooting.

As police searched the area, one unit came across a battery in progress near Lake View High School in the 1400 block of Irving Park Road. Several Hispanic men fled the scene in a white van while one or two others scurried into a nearby alley.

Officers believe they located the van minutes later near the Ravenswood Metra Station.

Early information to CWB has two individuals from the van being taken into custody with a third person going in from the 1400 block of Irving Park, and a fourth from Warner.

None of the individuals who were targeted in the gunfire wished to involve police in the matter. Most of them were released after police completed contact cards.

A reckless conduct case was opened at the Irving Park scene, which police say was related to the shooting attempt.

We will update this story as more information becomes available.