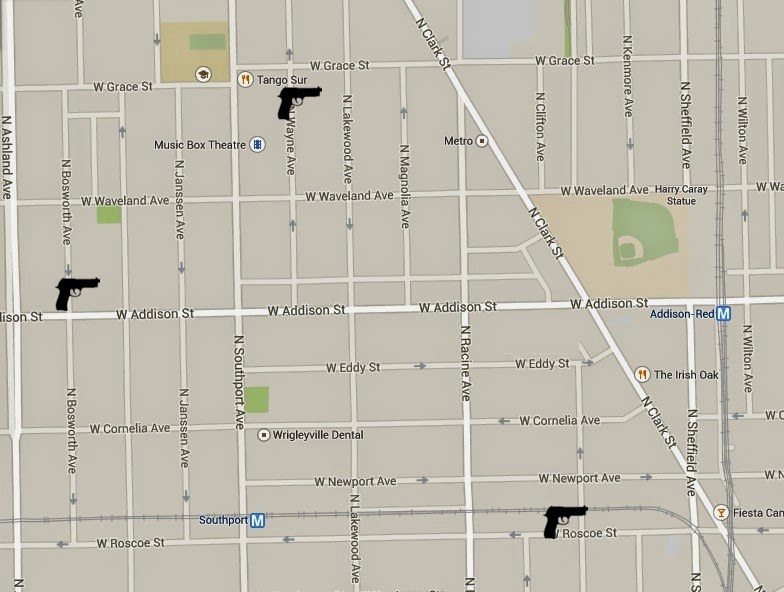 Three Lake View women were robbed at gunpoint Sunday afternoon in two separate but apparently related muggings. No one was injured and no arrests have been made.

The first armed robbery took place near Grace and Wayne around 1:10PM. Police say two women were walking northbound on Wayne when an offender jumped from a passing vehicle, produced a handgun, and robbed them. The gunman, described as a black woman who may have been wearing a Chicago Bears beanie hat, fled northbound in a white car. The victims did not see anyone else in the get-away car. (Case number HX557588.)

Fifteen minutes later, a man followed a woman into her apartment building at Addison and Bosworth, produced a handgun, and robbed her. This victim described her attacker as a “fat” black man with dreadlocks, about 5’10” tall, wearing a black jacket and black pants. He fled in an older-model white car—possibly a Pontiac Sunfire—with a rear spoiler.

Officers recovered a clip from a .177 caliber pellet or BB gun at the Bosworth location. (Case number HX557610)

None of the victims was carrying cash.

Also this weekend, a Wrigleyville man was mugged in the 1100 block of Roscoe early Saturday by two offenders who implied that they had a gun.

According to the victim, the offenders were two black men. One is about 18-years-old, 5’7″ tall, 140 pounds, wearing a gray sweatshirt. No description is available for the second mugger. Both men were last seen running northbound in the west alley of Seminary around 3:40AM. (CPD case HX556214)