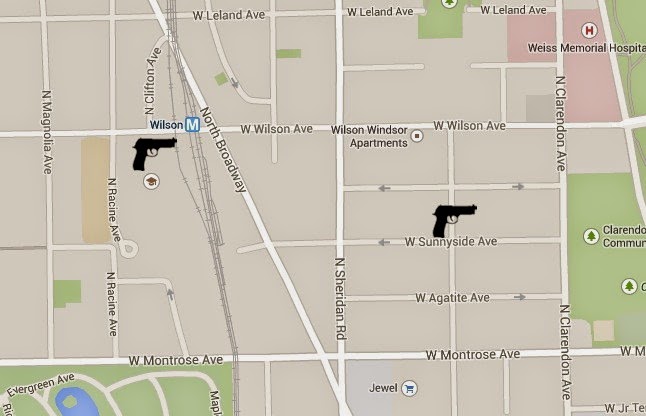 Concerns are high that there is unfinished business among gang members in Uptown this morning after two cases of shots fired were reported in under 12 hours. No one has been hit. Yet.

• At 1:55 this morning, multiple callers “blew up” the 911 call center with reports of approximately five shots fired in the area of Truman College at Wilson and Racine. UPDATE 1:23PM—A passer-by found five shell casings on the sidewalk in the 4500 block of Magnolia around 8:30 this morning. Likely remnants of this incident.

• Earlier, just after 3 o’clock Sunday afternoon, more than a dozen people called 911 to report approximately five shots fired in the general area of Sunnyside and Hazel. Witnesses reported seeing groups of people running in various directions. A gold 4-door car occupied by three individuals was seen speeding through a red light as well.

Two weeks ago, an innocent 21-year-old man was shot dead in broad daylight near Truman College when a drive-by shooting’s errant bullet struck him in the head. The intended target in that incident, a South Side gang banger, was not injured. He has refused to assist the police investigation.

Homicides in Uptown have spiked 400% this year under the stewardship of Alderman James Cappleman, who has repeatedly declined to press for a replenishment of the 19th district’s decimated police force. Cappleman has instead focused on public intoxication and vagrancy crackdowns.