Despite being provided irrefutable proof that our 19th district continued to shed police officers last year, the two aldermen who represent our neighborhood continue to falsely boast that manpower is up (thanks to them, of course).

The false statements of aldermen Tom Tunney (44th) and James Cappleman (46th) come as fresh police documents, reviewed by the Chicago Police Department Bureau of Patrol and acquired by CWB, show that our district lost 4 more officers in December, bringing the district’s manpower very close to its all-time low.

A total of 343 officers are currently assigned to the 19th district, that’s down from 347 last month, and down from the 345 who were assigned here in January 2014. Our current staffing level is just 3 higher than the district’s all-time low of the 340 officers assigned here last March.

Staffing is now a whopping 27% lighter than in October 2011. 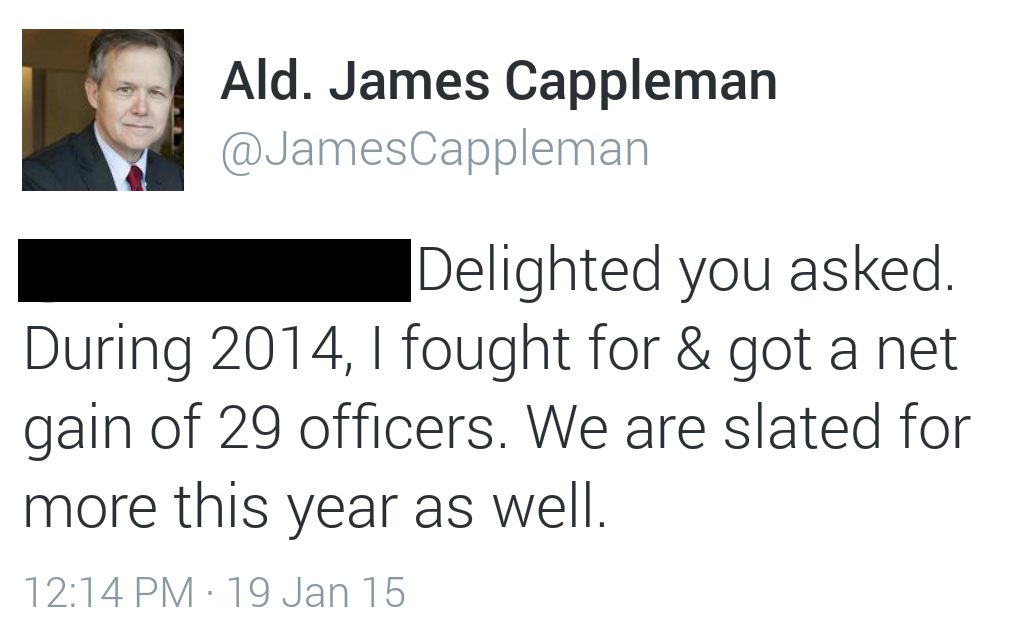 In response to an inquiry on Twitter last week, Cappleman wrote, “I fought for & got a net gain of 29 officers [in the 19th district during 2014]. We are slated for more this year as well.”

Tunney, at an aldermanic candidate forum last week, claimed that he pushed for and received a “net” gain of 22 officers last year.

And the minutes from the most recent Triangle Neighbors Association meeting show that Tunney told the organization that the “19th District is [sic] continues to work towards increased police force; 60 new officers were added to the midnight shift in 2014.”

Contrary to the aldermen’s claims, they did not secure more police officers for our neighborhood last year. Indeed, after they purportedly sought more officers, police manpower went down.

We reached out to the offices of both aldermen as well as to Cappleman’s campaign regarding the men’s claims. None of them has replied. On Twitter, Cappleman stated that his numbers came from a conversation with the district commander. (Of course, he untagged us before posting that.)

Tunney’s camp went a step further down the wrong information road in the alderman’s weekly newsletter on Friday.

In it, the alderman claimed to provide 44th ward crime information for the week of January 12 to 18. According to the newsletter, his ward experienced one robbery and two burglaries.

But a simple search of the Chicago Police Department’s online crime database shows that the 44th ward also had one aggravated battery and 18 thefts. Those categories show “zero” incidents in the alderman’s newsletter.

The readers’ requests are straight-forward, seeking, “the number of sworn officers of all ranks assigned to the 19th police district” on the 15th day of every month. The staffing information is reviewed and provided by the department’s Bureau of Patrol.

We have posted the department’s staffing documents for public review.