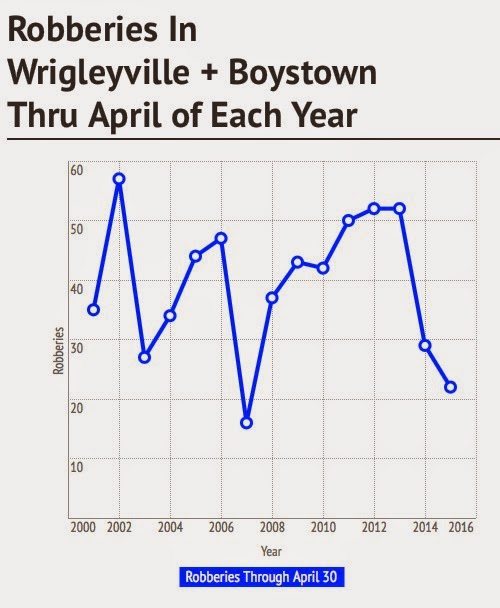 Even better, the year-to-date robbery count through April is the second-lowest on record, with a total of 22 cases logged. That compares to 29 through April of last year.

But before local politicians and CAPS officers were called out on their false narrative about crime being “down,” our neighborhood streets were downright dangerous as 2011, 2012, and 2013 recorded three consecutive record high robbery counts.

Citizens took a stand in the summer of 2013 and refused to accept the city’s false public statements. CAPS meetings became—how should we put this?—colorful. The police commander at the time, Elias Voulgaris, stopped citing department statistics, saying nobody believed them anyway.

While our district continued to lose officers in large numbers, Voulgaris ensured that all incoming officers went to the night shift when street crime was running wild. Anti-robbery tactics have paid dividends and we are on the cusp of having our neighborhood back.

Voulgaris transferred out of our district in April. Will progress continue to be made under the new commander or will the night time streets get short shrift? How will the new commander attack Uptown’s record-setting homicide pace while protecting three nightlife districts and a Major League Baseball stadium with 27% fewer cops than the district had just three years ago?

Time will tell. But, if this weekend is any indication—nearly half of the district did not have police assigned for patrol late Saturday into Sunday—our celebration may be short-lived.

Note: For statistical purposes, CWB considers the area of Chicago Police Department beats 1923, 1924, and 1925—including all crimes on the outside border streets of Irving Park, Southport, and Belmont—to be “Wrigleyville and Boystown.” Statistics are taken directly from the city’s publicly-available data portal.