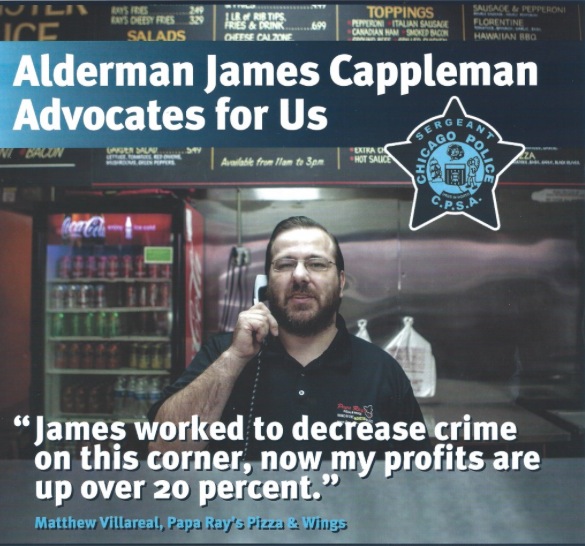 During this spring’s aldermanic run-off election in Uptown, the owner of Papa Ray’s Pizza & Wings starred in a “crime is down” ad piece for incumbent alderman James Cappleman.

“My profits are up over 20%,” Matthew Villareal beamed.

Those profits will be down slightly after one of Villareal’s delivery drivers was robbed of cash and several pizzas Friday night.

A witness reported seeing four men in hoodies mugging the delivery driver in the 800 block of Agatite at 10:35 last night. The Papa Ray’s manager called 911 when the driver returned to the store.

The driver described the robbers as five black men. One was over 6-feet tall, had dreadlocks, and wore a red shirt. One of the other men had a striped shirt.

In November 2013, two men were shot outside of Papa Ray’s front door.

Image: Uptown Chicago Rocks
———-
Email us.  Facebook us. Twitter us.
About CWBChicago 4363 Articles
CWBChicago was created in 2013 by five residents of Wrigleyville and Boystown who had grown disheartened with inaccurate information that was being provided at local Community Policing (CAPS) meetings. Our coverage area has expanded since then to cover Lincoln Park, River North, The Loop, Uptown, and other North Side Areas. But our mission remains unchanged: To provide original public safety reporting with better context and greater detail than mainstream media outlets.
Website Facebook Twitter YouTube