UPDATE JUNE 29—Video of first responders taking the man into custody is out. (LINK)
——-
Police detained a man who drove his car through the middle of the Chicago Pride Parade Sunday afternoon. One police officer and a medical worker were slightly injured in the 2:40PM incident.

The driver was treated at Swedish Covenant Hospital for his injuries.

Police said that the same vehicle was also reported to have driven into parade barricades at Broadway and Surf about 15 minutes before the parade started at noontime.

According to witnesses, the man gained access to the route by driving through a crowd of people who were waiting to use the official parade-crossing zone at Addison. He then turned north into oncoming parade participants as police and emergency workers tried to make him stop.

A police officer shattered the back window of the vehicle during the effort to stop the driver.

Police have not yet identified the man, but the vehicle’s license plate is registered to an Uptown resident.

Mainstream media outlets are reporting that the man was released without charges, however,  CWB sources have not confirmed that directly. As of noon on Monday, a prisoner remains under police guard at Swedish Covenant,  but a source declined to offer additional information citing privacy laws.

The vehicle was brought to a stop at Halsted and Waveland. Police indicated that the man had a knife, though they did not elaborate on its size or how they came to find it. 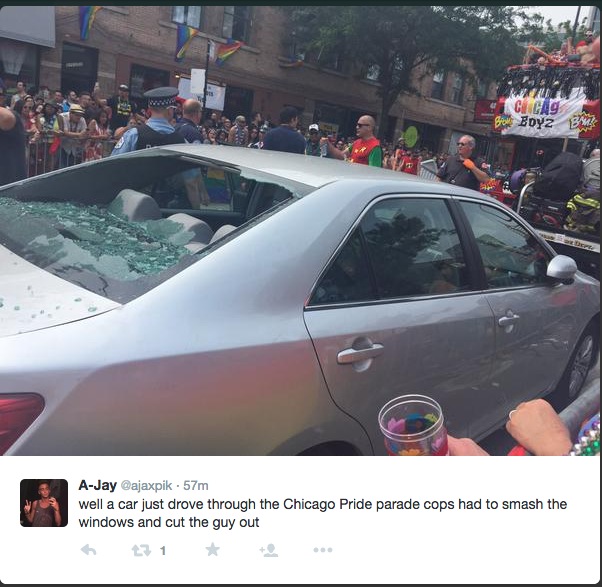