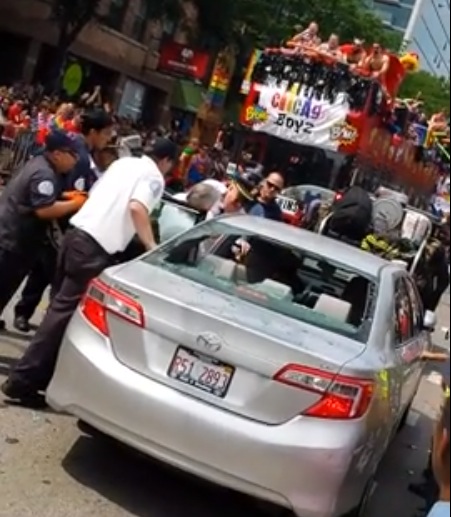 Video has emerged of police removing a man from a vehicle after he drove through a barricade and into oncoming marchers. (VIDEO LINK HERE)

The video, which runs a bit over two minutes, was posted on Youtube by Ken Simon.

The footage begins moments after the car came to a halt as first responders are trying to get the 60-year-old driver out of his vehicle.

He is placed on the ground, searched, handcuffed, and is then walked off the route as the crowd cheers nearby police and firemen.

CWB’s original story about the incident is HERE. All images from video by Ken Simon.
———-
Email us.  Facebook us. Twitter us.
About CWBChicago 4360 Articles
CWBChicago was created in 2013 by five residents of Wrigleyville and Boystown who had grown disheartened with inaccurate information that was being provided at local Community Policing (CAPS) meetings. Our coverage area has expanded since then to cover Lincoln Park, River North, The Loop, Uptown, and other North Side Areas. But our mission remains unchanged: To provide original public safety reporting with better context and greater detail than mainstream media outlets.
Website Facebook Twitter YouTube

Carjacking victim disarms offender, beats him with his own gun, prosecutors say