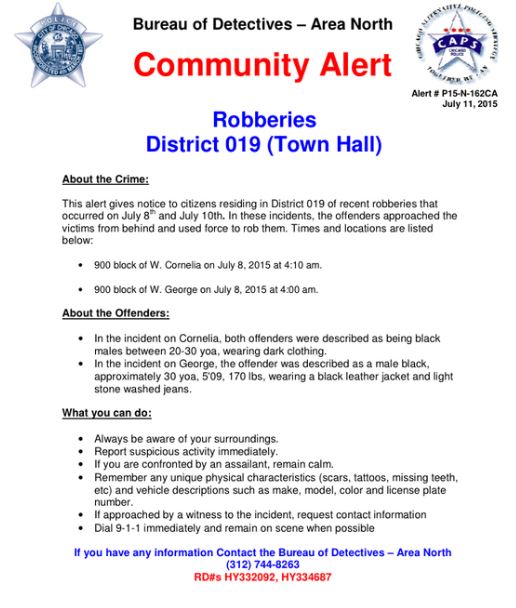 Chicago police on Saturday issued a community alert after detectives linked two robberies that were committed in our neighborhood over the past few days.

The alert, shown here, draws a connection between the July 8th mugging of a bartender in Boystown and yesterday morning’s robbery of a Lakeview resident near George and Mildred.

Both robberies took place around 4AM.

———-
Email us.
Facebook us. Twitter us.
About CWBChicago 4360 Articles
CWBChicago was created in 2013 by five residents of Wrigleyville and Boystown who had grown disheartened with inaccurate information that was being provided at local Community Policing (CAPS) meetings. Our coverage area has expanded since then to cover Lincoln Park, River North, The Loop, Uptown, and other North Side Areas. But our mission remains unchanged: To provide original public safety reporting with better context and greater detail than mainstream media outlets.
Website Facebook Twitter YouTube